Health and Wellbeing Board is launched in Cheshire East 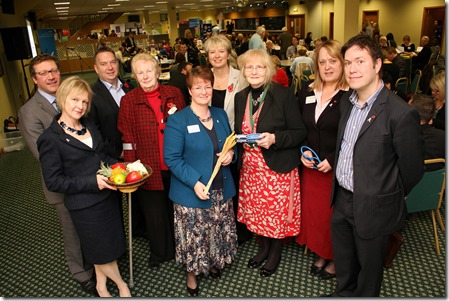 A new board in Cheshire East, which will focus on people’s health and wellbeing needs, has been officially launched.

The launch of the Health and Wellbeing Board at the Alexandra Stadium, in Crewe, brought together a range of people from the Council, the NHS and other key partners such as the voluntary community and faith sector to discuss ways in which they can work better as a partnership to improve people’s health.

Coming into being in April 2013, it will plan services that meet the needs of local people and help them to stay healthy and independent by taking into account the bigger picture such as transport, housing, jobs and leisure.

Councillor Janet Clowes, Cabinet member in charge of health and adult social care, said: “The emphasis of the day was working together better under the new system to improve health outcomes for our communities.

“This event was extremely well received by the near-200 people who attended and they all learned how their organisation could fit in and contribute to our aims of improving people’s health and wellbeing in Cheshire East.

“The day started with a service user highlighting their experiences under the old system sharing their view on what could be improved and colleagues also took part in a market place which increased awareness of some of the services that are generally available.

“Attendees felt the event was a great example of partnership working. We need to work in a way that supports people in Cheshire East throughout their lifetime; to ensure they have the best start in life, to live well and to age well.”

Cheshire East set up its Shadow Health and Wellbeing Board in September 2011. It meets every two months, with the permanent board being established by April 2013.

In order to take on board what the community says, an initiative called Healthwatch is being established. This will be the new consumer champion for health and social care and will be operational by April 2013.