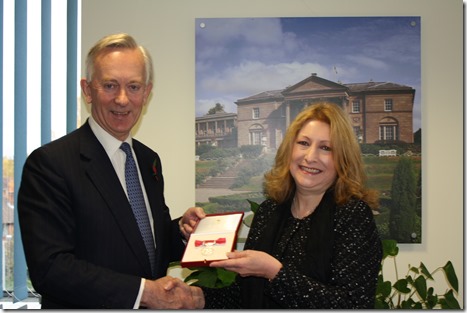 A Cheshire East resident has been awarded The British Empire Medal after years of hard work fundraising.

Edna Weatherby, who is from Alsager, was awarded the medal after raising thousands of pounds for the Royal National Lifeboat Institution (RNLI).

The British Empire Medal has been reintroduced this year, after a 12-year absence. This year’s awards saw seven Cheshire residents receive a medal.

“This is a thank you from the nation to the hard working volunteers within our communities who are the backbone of society.

“I hope that going forward, more people will consider nominating outstanding people they think are worthy of this award.”

“It is a tremendous honour to receive this award on behalf of my mother.

“She has worked tirelessly for many years raising money for the RNLI as Secretary of Alsager Ladies Lifeboat Guild and I know that she is honoured to have been awarded the British Empire Medal.”

“I am delighted that the British Empire Medal has been reintroduced. It is only right that deserving members of the public are recognised for their hard work in their communities and for charity.”

“Here in Cheshire East we are fortunate enough to have many residents who do a great deal of hard work in their local community.

“These people don’t do their work for plaudits. However, it is only right that they are recognised.”