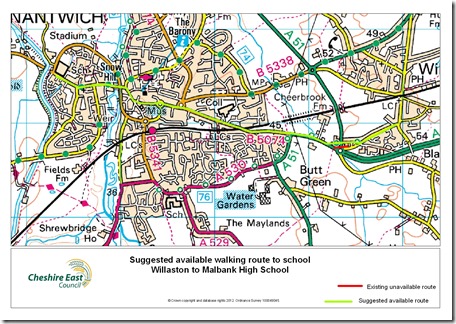 Willaston and Rope Ward Councillor Brian Silvester is backing local parents in Willaston in their bid to maintain a free bus service for their children to Malbank School in Nantwich. He said," The following have been identified by parents as hazards that the Council do not appear to have taken into account.

· The alternative "walking route" via Cheerbrook Road and across the A51 to London Road, is a indirect route.

· The alternative "walking route" is unsuitable as in places there is little if no street lighting.

· The alternative "walking route" involves crossing a railway crossing that is only covered by a half barrier - therefore making this a potential health and safety issue.

· The alternative bus service (Arriva) will cost approx £300 per term.

I have written the Council to ask them to review their decision that withdraws the free bus service from Willaston to the Malbank School."

Councillor Silvester is urging parents in Willaston to contact the Council or himself if they have concerns about the proposed changes.

The Council have informed Cllr Silvester that, 'In terms of your local ward area, one route that is currently under review is the route between Willaston and Malbank High School. The crossing of the A51 at the Cheerbrook Roundabout was originally assessed as “unavailable to walk” but because of the recent installation of a toucan crossing this has made the route potentially ‘available to walk’.  See below and attached.