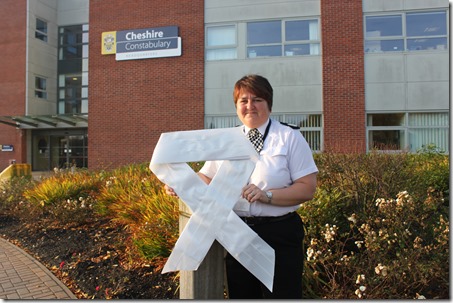 Cheshire Police have been tying white ribbons outside their police stations in a show of support for national violence against women day.

The White Ribbon has been adopted as the symbol of preventing violence against women with a national awareness day for the White Ribbon Campaign this Sunday 25th November.

The White Ribbon Campaign wants to ensure that men take more responsibility for reducing the level of violence against women.

Domestic violence is very common. Research shows that it affects one in four women in their lifetime. Two women a week are killed by their partners or former partners. Assistant Chief Constable, Ruth Purdie who placed a ribbon outside the police headquarters commented that "Cheshire Police regularly encounter incidents of domestic violence, which can often be life threatening and destroy the lives of women. We urge all women who are experiencing domestic abuse to report it to Cheshire Police in the first instance. Don’t suffer in silence!

Cheshire Police have supported this national campaign for several years because it is an issue which the police deal with all year round − any case of domestic violence is one too many. Cheshire Police are committed to domestic violence by putting an end to abuse in the home. From staff donating money to wearing white ribbon badges, we are now encouraging the general public to please give your support by buying and wearing a White Ribbon around November 25th. This is a personal pledge to never commit, condone or be silent about violence against women."

The White Ribbon Campaign appeared in 1991 and has spread to over 57 countries around the world. Its basic principle is the importance of men and boys to speak out against all forms of violence against women. The UK supports the campaign from November 25 until December 10 but campaigns can occur at any time of the year.

This weekend, officers will be tweeting their pledges of support to further highlight their understanding of domestic violence and its life threatening consequences. To read our officers pledges, please visit www.cheshire.police.uk to sign up to your own local twitter police sites.

A lot of the abuse is often mental and the abuser will make your friends or family feel uncomfortable when visiting so that they cease to come and the purpose is to isolate you so they have control over you. In extreme cases they may find excuses to give you tablets to help you with your problems. These are often illegal steroids to make you fat so no one else will look at you  but these can cause heart attacks and feeling suicidal .