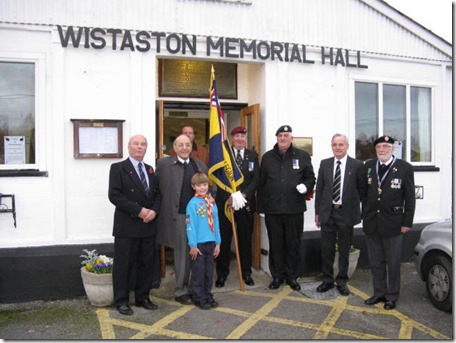 Wistaston Memorial Hall was full for the Service of Remembrance on Sunday 11 November 2012, starting at 3pm. Those present included local residents, several Parish Counsellors, members of The Royal British Legion, plus Beavers, Cubs, Scouts and Explorers from the Wistaston 35th SWC Scout Group.

The poppy display was arranged by Olive Williams. The music was provided by Myra Wood and members of the Wells Green Church Choir. The Service was led by Rev Mike Turnbull and Rev Ken Sambrook (St Mary's Church, Wistaston) and Fr Martin Moran (Oblate Retreat Centre). A list of the names of the sixteen men from Wistaston was read by Barbara Brereton. A special tribute was paid to one of the sixteen men from Wistaston who perished in WW2: Sergeant George Alfred Hinton, No.53 Squadron, Royal Air Force who was reported as ‘missing’ on a bombing raid on 26th November 1940, aged 28. He was the observer/navigator in a Bristol Blenheim Mk IV plane from RAF Thorney Island, Sussex. 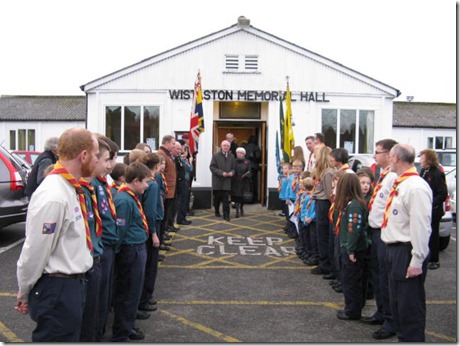 A wreath was placed at the front of the Hall by John Cooke (Hall's President). Jack Gresty played 'The Last Post' and 'Reveille'.

A collection raised £248 for The Royal British Legion.

The Hall's Chairman John White said, "This was another respectful Service during which the sixteen Wistonian's who perished in the Second World War were remembered and due tributes given. We will always remember them."

The Wistaston Memorial Hall was opened in March 1949.