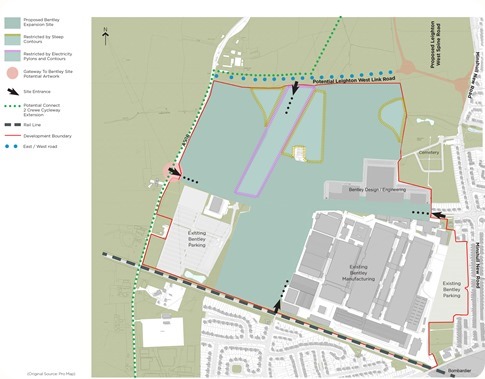 Cheshire East Council has backed a masterplan which outlines how Bentley Motors’ factory in Crewe could look in the future.

The development framework and masterplan, drawn up by Bentley Motors in discussions with the council, was endorsed at a meeting of cabinet today.

The document provides a platform to deliver a modern, advanced manufacturing operation in the future, which would be more efficient, secure and productive and which could potentially grow and expand in line with the automotive company’s ambitions.

The masterplan underwent six-weeks of public consultation in the new year. This process has enabled Bentley Motors to better understand the implications of its proposed ‘campus’ at an early stage, so that any future plans are better informed and can minimise the impact on the local area.

Cabinet today agreed that the document be endorsed ‘subject to concerns raised through the consultation process being considered as part of any future planning application, or other approval, submitted by Bentley Motors’.

Councillor Don Stockton, cabinet member for regeneration said after the meeting today: “This positive step once again shows the council’s commitment to working with local businesses and listening to local people to nurture future economic growth and jobs.

“Bentley Motors is of tremendous importance to the local, regional and national economies. So it has been vitally important to have an opportunity to hear the opinions of local people and organisations to help develop a masterplan that will allow Bentley Motors to continue to thrive and, hopefully, expand operations and create jobs at its Crewe site in the future.

“The masterplan has been through a comprehensive consultation process, which has highlighted a range of issues, which need to be taken into account by Bentley Motors if the company is to pursue its vison of a campus environment.

“I am pleased to see that, in response to the consultation feedback, changes have been made to strengthen the framework document and address areas of concern.”

More consultation respondents supported than objected to the vision of a campus and a substantial majority support the growth of Bentley Motors.

Submissions were broadly positive in supporting the growth of Bentley Motors. All comments have been reviewed and responded to in the consultation report. This has resulted in a number of changes to the development framework.

More than 4,000 people are employed directly by Bentley, which also provides many apprenticeship opportunities locally. It is Crewe’s largest single employer, accounting for more than £1billion of UK exports each year.

The campus would locate manufacturing, design, research and development, engineering operations and boosted security in a single integrated site with ‘seamless connectivity’ to enable ‘the efficient flow of people, goods and services’.

The framework aims to set out the key design, development and planning policy considerations, which will be used in the determination of potential future planning applications relating to the site.

Bentley Motors’ aspirations for its expanded site would require the closure to the public of parts of Pyms Lane and Sunnybank Road. However, no decision has been taken on these proposals.

Any detailed applications relating to the campus or highways would be subject to further consultation before any formal planning decisions would be made.

The council’s household waste recycling centre at Pyms Lane is also within the long-term ambition for the campus. There are no plans to close this centre and any future change to the facility would have to be consistent with the household waste and recycling requirements of Crewe and would require a future approval and would also be subject to detailed consultation.

Most of the land identified within the campus ‘vision’ is owned by the council and any change would be subject to detailed future negotiations.