NCG left from Tower Bridge in the capital at 4am and arrived to Nantwich town square at 10.30pm following an arduous 220 mile journey. Ten cyclists, along with two support crew, took part in the mammoth journey.

En route to Nantwich they passed iconic London landmarks before heading out through Windsor, Henley on Thames, Oxford and the Cotswolds.

On arrival in Nantwich the cyclists and support crew were treated to food and drink at the Nantwich Book Shop & Coffee Lounge.

Last year NCG cycled in the reverse direction from Nantwich to London in aid of Leighton Hospital and raised over £5,000.

This year NCG are raising money for The Wingate Special Children’s Trust, based at the Wingate Centre, in Wrenbury - http://www.thewingatecentre.co.uk - and have already raised over £3,700. They chose The Wingate Special Children’s Trust because to maintain the Centre and to subsidise their student’s activities they have to raise £300,000 each year. Their state of the art gym makes a difference to the lives of children and adults of all abilities including those with extreme physical and learning difficulties.

A representative from NCG said, "This has been an epic challenge and each of the riders should be immensely proud of what they have achieved. We would like to thank everyone who took part and all the members who helped to organise this successful event - you are all a credit to NCG. Thank you so much to all of the people who have donated, and a special thanks to Morrisons, Chatwins, Halfords, @trainingbytesize, Swanline Print, Strada Italian and the Nantwich Book Shop & Coffee Lounge for their donations of advertising, transport, water and food."

NCG are a Cheshire based cycling group, run by its members at all levels from beginners, sportive enthusiast or even racers. 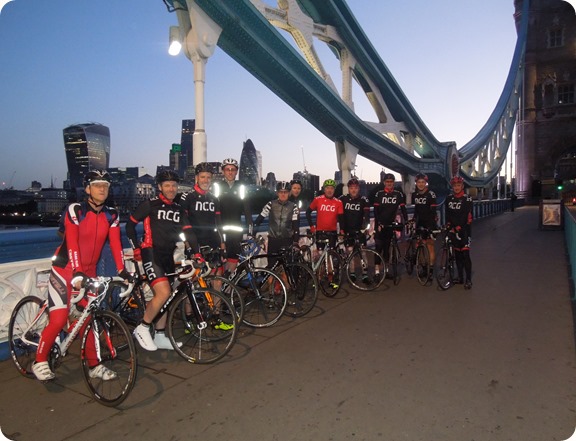