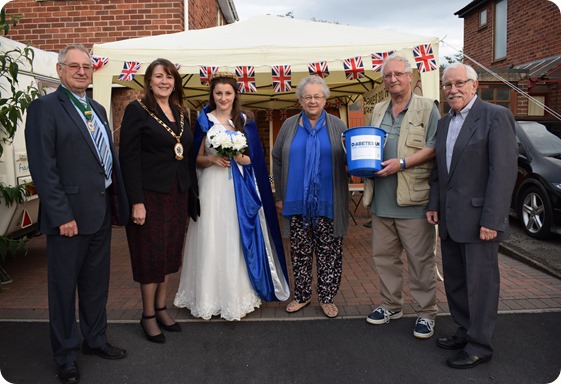 A Garden Party in aid of Diabetes UK took place on the evening of Wednesday 13th July 2016 at 6 Westfield Drive, Wistaston, Cheshire.

Sheena & Ken Sambrook once again allowed their house and front & back gardens to be used for this annual event, which always takes place on the second Wednesday in July.

Sheena and Ken who also organised the event are President and Treasurer respectively of the Crewe and South Cheshire Voluntary Group of Diabetes UK: http://crewe-and-south-cheshire.diabetesukgroup.org/ .

Entrance was 50p and included a tea or coffee, strawberries were available for sale and there were stalls selling cakes, jams and bric-à-brac. There was also a prize raffle.

More than eighty people attended over the course of the evening including Madam Mayor of Cheshire East Borough Council, Councillor Olivia Hunter and Consort Philip Boulton, along with the recently crowned Wistaston Rose Queen (Emma Horne) and her Attendant (Emily Edge). The Mayor and Consort were chauffeur driven to Wistaston in the Mayoral Bentley by the Mayors Officer Clive Bradshaw.

Ken Sambrook said, “We are always amazed at the wonderful support we receive from friends in the local community. It makes the evening such a great success and enables us to continue to support Diabetes UK, this year raising £475.”

All proceeds will go to diabetes research projects and also to support newly diagnosed children and adolescents with diabetes to allow them to attend one of several educational residential holidays held around the United Kingdom. The residential allows them to integrate with other young people with diabetes and share experiences, which may assist them to learn to control their condition.

On average the Crewe and South Cheshire Voluntary Group raises £7,500 per year for Diabetes UK.