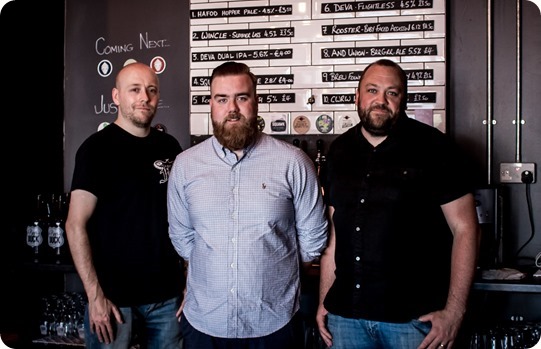 The successful Beer Dock concept breaks the traditional bar mould, with floor-to-ceiling shelves carrying beers, lagers and ciders from across the globe.

There is also a tasting area with ten craft beers on draught, all set in a relaxed environment with a central seating area that encourages conversation.

The UK craft beer scene has boomed in recent years, and Beer Dock franchisor Sam McGarrigle believes that Nantwich was the perfect location to expand the business.

Sam said: “Finding the right premises took longer than expected, but it had to be right. The Swinemarket shop is an exciting opportunity for Beer Dock. What we offer is very different and I hope that it adds to an already vibrant food and drink scene around the town.”

“We pride ourselves on stocking one of the largest selections of bottled beers from around the world, but we remain committed to offering a wide range of beers from Cheshire breweries, which all helps to boost the local economy,” he added.

The new Nantwich franchise is run by Jon Mitchell and Mike Ramm. The pair are well known in local circles, especially for making Dabbers laugh at their popular Civic Comedy nights.

With Nantwich already famous for its bars, restaurants and events like the Jazz and Food Festivals, the pair were confident that an independent bottle boutique would be well received.

Mike said: "The craft and artisan beer scene has been a passion of ours for many years. Nantwich is a successful destination, and we hope that this will add even more to the experience.”

“We are both passionate about the area, and being able to bring something truly unique to the town was an opportunity we couldn’t miss."

As well as the original unit in Crewe, Beer Dock is also planning an outlet in nearby Alsager.

For further information about the Beer Dock brand and franchise opportunities visit www.beerdock.co.uk