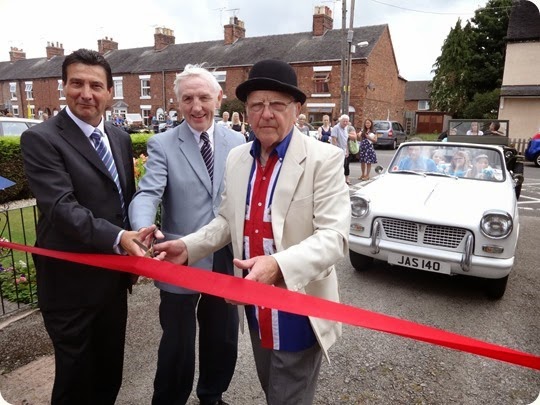 The event began with a procession from the Moorfields War memorial at 12:30pm. The procession included the retiring Willaston Rose Queen (Gladys Llewellyn) and this year’s Willaston Rose Queen (Ffion Owen) and her Attendants (Greta Piasecka and Janista Harding) in a fifty-two year old Triumph Herald open-top car owned by Dave Parker and driven by Shaun Farrell. The procession also included a number of other classic vehicles, along with the 26th South West Cheshire (1st Willaston) Scout Group.

Once on the Lettie Spencer Playing Fields the retiring Willaston Rose Queen (Gladys Llewellyn) thanked the people of Willaston for their support during her year in office. Willaston Primary School Headteacher Miss Clare Grehan then placed the crown on the head of this year’s Rose Queen Ffion Owen, aged 10. Ffion stated that her chosen charity this year is Alder Hey Children's Charity http://www.alderheycharity.com/ .

Attractions included a collection of classic cars and motor bikes, a dog agility show by the Wyche Dog Training Club, music from Willaston School, a bouncy castle, bungee trampolines and children’s sprint races. There were numerous stalls including a coconut shy, skittles, paintball, hook-a-duck, tombola and face painting. Paul Simpson and Julie Lewis from The Cat Community Radio provided music and commentary throughout the day. Refreshments were available on the playing fields and within St John’s Church Hall.

Ffion Owen’s mother, Carol Owen, said, "Ffion is delighted to be Rose Queen this year after being so ill last year that she attended the Fete in a wheelchair. Her nominated charity is Alder Hey Children's Charity. She hopes to raise money for Alder Hey as a big thank you for helping her through her illness.”

Ffion Owen’s grandparents, Dave and Doreen Parker, said, "We are so proud that our beautiful granddaughter along with her Attendants are representing Willaston over the next twelve months. We wish them all the best in their fund-raising activities”.