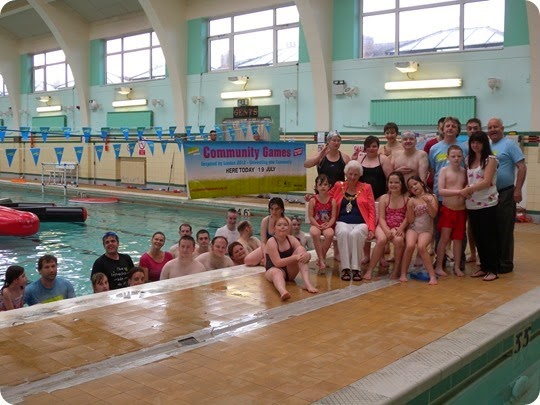 A Community Games swimming gala was held on 19 July at Crewe swimming pool for people with disabilities. Dozens took part and the participants had fun with swimming aids and on the giant inflatable structure, some competed in races and others enjoyed ‘aqua dancing’ with music playing on the pool-side.

After the pool session, the swimmers joined their friends at a disco and buffet at the Purple Onion - the Lady Verdin Trusts’ drop-in centre in Edleston Road. The disco had a football theme, to celebrate this year’s World Cup in Brazil, and many of the participants wore their favourite football shirt.

Everyone involved in the gala were presented with a Community Games certificate by the Mayor of Crewe Town Council, Councillor Pam Minshall. The event was organised by Seahorse Swimming Club, as part of the country-wide Community Games programme, which brings communities together by getting involved in sport and cultural activities, inspired by the London 2012 Olympic and Paralympic Games.

“The event was a huge success and our thanks go to the town mayor and the staff at the pool and at the Purple Onion for their support. It was good to see so many people with disabilities having such a good time, and staying active in the pool and on the dance floor. With all the rain, the pool was the best place to be on the day, as it was probably one of the wettest days this summer!” - Seahorse secretary, Gareth Roberts.