A hundred people watched Willaston Junior Choir and the Wistaston Singers choir perform a joint ‘Spring Concert’ at Willaston Primary School (http://www.willastonprimary.co.uk/) on the evening of Wednesday 2nd April 2014. It was the first time that the choirs had combined to perform a concert.

The Wistaston Singers sang 42nd Street (Harry Warren), Phantom of the Opera (Lloyd Webber), and All in the April Evening (Hugh Roberton). Their Conductor was Phil Houghton and their Accompanist was Jane Hale.

The Choirs jointly sang Can You Feel The Love Tonight (John/Rice) and Oliver (Bart). The concert finished with the combined singing of The Teddy Bears’ Picnic (John Bratton) which involved both choirs waving their teddy bears in the air. 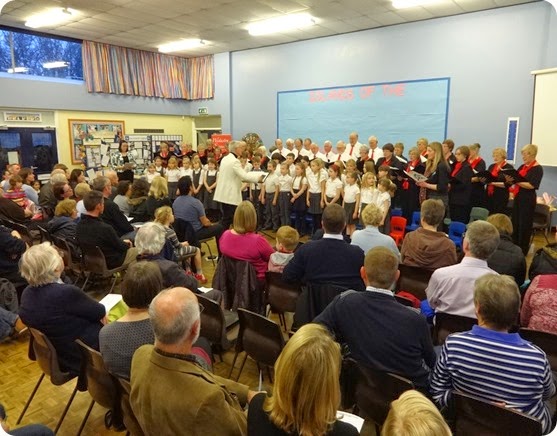 Willaston Primary School Headteacher Clare Grehan gave her thanks to all involved and to the amount of time spent in rehearsing for the concert.

Phil Houghton said, “I have been totally blown away by the enthusiasm and enjoyment that the children have shown in learning the music and words for the pieces we jointly sang. Their concentration and attention to detail was exemplary. They are a credit to the school. All this could not have been achieved without the help and guidance of school staff and I am particularly grateful to Tania Lloyd and Elaine West for their sterling work with their choir in what I know has been a busy period for them. This concert was the brainchild of a member of the Wistaston Singers, Brian Simpson, who has family members at the school and I am grateful for his hard work in making this concert possible.”

Proceeds from the concert will go to Willaston Primary School.