Buddy Holly three-piece tribute ‘The Phil Ball Band’ opened the show and warmed up the crowd by singing several of his classic hits including Not Fade Away, That'll Be the Day, Oh, Boy!, Heartbeat, and Peggy Sue. 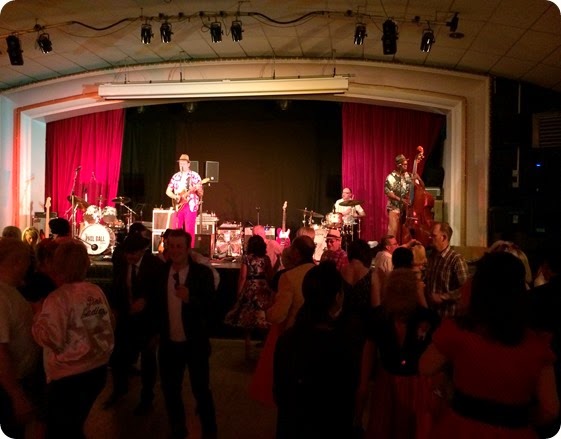 During the interval there was a charity auction and raffle in aid of Reverse Rett Charity UK http://www.reverserett.org.uk/ and the Wingate Centre http://www.thewingatecentre.co.uk . A family spoke movingly about the effects of Rett Syndrome on their young daughter and asked for audience support in raising money for ongoing research into this genetic disorder. They also spoke about the ‘14:14:14 Cycle Challenge’ which from 1st June this year will see a group of cyclists attempt to cycle through 14 countries in 14 days to raise awareness of Rett Syndrome and raise money for Reverse Rett: http://www.justgiving.com/TeamCiara14-14-14

Jay the Magician circulated amongst the tables to demonstrate his tricks.

Warble Entertainment provided the entertainment and have uploaded the official photos to their Facebook page: https://www.facebook.com/WarbleEvents

'The Crumperie' - http://crumperiecrepes.co.uk/ - provided refreshments for sale outside the venue.

The event finished with a disco.