George Raiswell, aged 13 from Wistaston, played for 12 hours during a fundraising 'Tennisathon' from 7am to 7pm at Wistaston Jubilee Tennis Club (WJTC) on Saturday 5th April 2014.

Younger brother James, Mum Julie and Dad Chris, friends and members of WJTC helped out George by playing with and against him over the course of the day. His friend Jack Whalley, aged 14 and the current WJTC Junior Boys singles champion, played for 5 of the 12 hours.

Results were recorded onto a large board and 184 games were played in total, which comprised 19 and a bit sets. George recorded 10 net cords over the day. 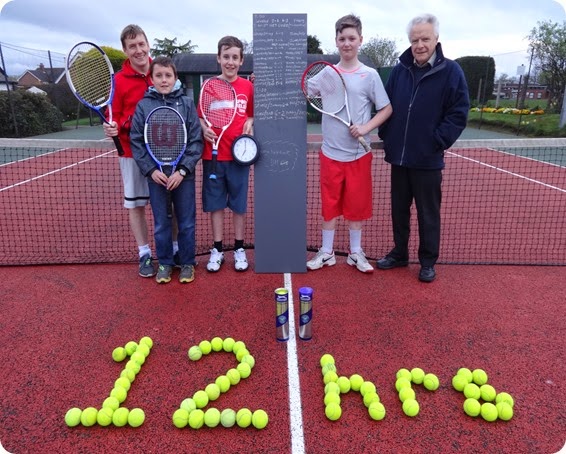 George also raised money at a celebrity sweepstake and his Mum made cakes to sell during the Tennisathon. In total he has raised £187. George, who is a Year 8 student at Shavington High School, organised the event to raise money for Sport Relief - http://www.sportrelief.com . The money will help people in the UK and in some of the world's poorest countries.

George said, "It was a painful but enjoyable experience and I would like to thank everyone who gave up their time to help me and to people who sponsored me".