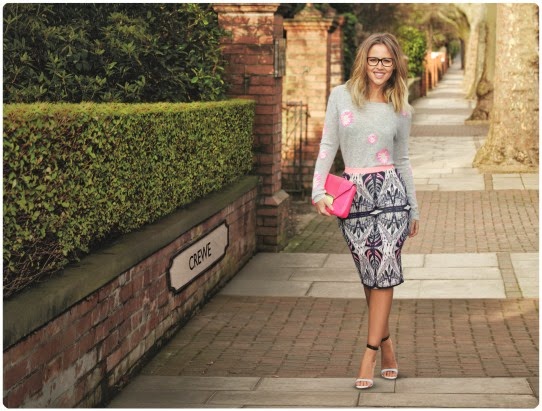 GIRLS ALOUD singer and West End actress Kimberley Walsh has teamed up with Specsavers in Crewe & Nantwich and anti-bullying charity Kidscape to find a specs-wearer with Something Kinda Oooh as she launches the annual Spectacle Wearer of the Year competition.

This year’s overall winner will be presented with £10,000 in cash and a dream holiday to the Bahamas at a star-studded awards event hosted by Gok Wan later this year.

Kimberley says: ‘I love my glasses, I like to make a real statement by wearing something bold. They are such a part of who you are and a fun way to express yourself. Everyone should wear their specs with pride!’

‘I’ve been wearing glasses for six years. I think I let my eyes get a little bit worse than I should have before I did start wearing them but now I have fully embraced them - it’s a new look for me.’

Kimberley is the face of Specsavers’ Love Glasses campaign and the associated Spectacle Wearer of the Year competition, which sees £1 donated by Specsavers to Kidscape for every entry.

Michael Elleray, store director at Specsavers Crewe, says: ‘We know that people in Crewe love their glasses and we want to celebrate it. The Spectacle Wearer of the Year competition gives us the opportunity to prove that glasses are fabulous at any age by celebrating the specs wearers right on our doorstep who wear them with pride and plenty of style.’

Kimberley continues: ‘We’re all more fragile and vulnerable when we’re young and bullying is much more prevalent than we think and takes many different forms. It’s important that we stand up to bullies, know how to spot the signs and encourage young people to have strength and the confidence to be themselves.’

There are four age categories – 16-24; 25-39; 40-59 and 60+, plus a Facebook favourite voted for by the public. A winner from each category will win a VIP makeover and will attend the celebrity-studded grand final in London at 8 Northumberland Avenue on 07 October.

To be in with a chance of scooping the biggest accolade in the specs-wearing world, specs wearers can enter the competition online, www.specsavers.co.uk/loveglasses, via Facebook, www.facebook.com/specsavers, or at their nearest Specsavers store.

The ultimate Spectacle Wearer of the Year winner will receive £10,000, plus a week’s holiday for two in the Bahamas courtesy of the Grand Lucayan Beach & Golf Resort and a wardrobe of specs to suit every style.