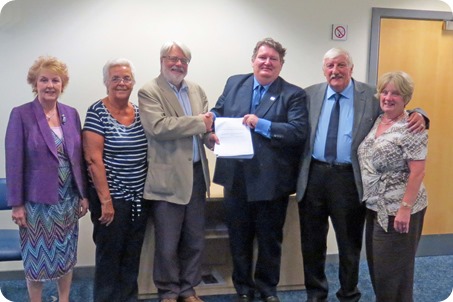 Representatives from Hands off Wistaston and Wistaston Parish Council have met up with their Ward Councillors Margaret Simon and Jacquie Weatherill, at Cheshire East Council’s Headquarters in Sandbach, to hand over their petition to save our local Green Gaps to the Council Leader.  The petition entitled ‘Protect existing Green Gap land in the Crewe and Nantwich area from development’ had been supported and signed by over 2000 local residents. Members of Hands off Wistaston (HOW) had gained support for it at local clubs and associations and they had also had people queuing up to sign it at a street stall they recently held in the centre of Nantwich.

The message that we need to save our local Green Gaps has struck a chord with residents of Crewe and Nantwich as they are coming under increasing pressure from developers rushing to get in planning applications on them before the emerging Cheshire East Local Plan is in place.  The Green Gap Policy was adopted by the former Crewe and Nantwich Borough Council to keep our towns and villages apart from each other in order to help them to retain their identities.

“We had absolutely no problem collecting 2000 signatures in a very short time because local people feel so strongly about the possibility that their Green Gaps might disappear.  No-one is keen to see Crewe, Nantwich and the villages in between joined up”.

“I am delighted to accept this petition and I thank the Wistaston representatives and their Ward Councillors for all their hard work.  The  more that people are prepared to show their anger at speculative developers the harder I am prepared to fight to help them.  It is clear that Green Gaps are very important to residents.  We are all in this together we must stop unplanned, unwanted and unsustainable development.”

“Wistaston residents have been really up against it from unscrupulous developers in recent months, just about every green field in the area between Church Lane and the Middlewich Road is currently being speculated on.  They are not on their own either, many of our local villages have developers making applications on land that is currently prime agricultural land making up our Green Gaps.  This petition will help our Council Leader, Michael Jones, to demonstrate how strongly people feel about unwanted development in the Crewe and Nantwich Green Gaps.”

Wistaston Ward Councillor asks for residents to make their feelings known about application to build up to 170 homes on land off Moorfields, Willaston

I would like to draw your readers’ attention to an application which has been made by Richborough Estates to build up to 170 homes on land off Moorfields, Willaston.  This land is behind Crewe Road, Wistaston and between Wistaston Road, Willaston and Moorfields.  Clearly this application affects people who live in both Wistaston and Willaston Parishes.  This application is in a Green Gap.  The former Borough of Crewe and Nantwich adopted the Green Gap Policy to help to keep the towns of Crewe and Nantwich apart from our villages which, in turn, helps them to keep their own identities.  Local action groups Hands off Wistaston and the Willaston Green Gap Action Group and Parish Councils in both Wistaston and Willaston have been working really hard to get the message out that our Green Gaps must be protected.

It would be helpful if local residents of Wistaston and Willaston could feed in their concerns about this application either by emailing them to planning@cheshireeast.gov.uk

or by going online to Cheshire East’s website and logging them on to the application via the Environment and Planning section using 13/3688 as the reference.  Anyone wishing to write in should write to case officer -

It is really important that you feed in comments to any individual planning application that affects you.  It is so easy to leave it to someone else to comment and voice objections but if everyone does that then the strength of local feeling cannot easily be judged.