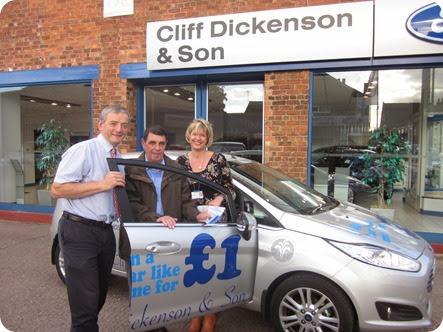 St Luke’s (Cheshire) Hospice supporters  Terry and Barbara Gamble’s luck is clearly in after winning a brand new car, the grand prize in the hospice’s Silver Anniversary Superdraw, which raised over £40,000 for patient care.

Mr and Mrs Gamble, from Northwich, drove away in their grand prize - a new ‘63’ plate Fiesta Zetec, supplied by local Ford car dealership Cliff Dickenson & Son -  on Friday 20 September, won for the price of just a £1 raffle ticket.

As part of the hospice’s packed calendar of events to commemorate 25 years of providing invaluable care to the Mid and South Cheshire community, 25 winners were selected from the annual Super Draw, with Mr and Mrs Gamble winning the top prize.

Mr and Mrs Gamble picked up the keys from St Luke’s promotions manager Claire Langston and Chris Winward of Cliff Dickenson & Son, sponsor of the competition.

Long-time supporters of the hospice, the couple were delighted to be the lucky local winners.

Terry, a retired aircraft engineer, said: “We were so shocked to find out we had won. I’m still amazed.

“The car is a perfect fit for us now that I’m retired and I’m delighted to hear the draw has raised so much for St Luke’s. We’ve been supporters for a long time and it really is a wonderful local cause.”

St Luke’s Claire Langston said: “A huge congratulations to Mr and Mrs Gamble on their fantastic win. The hospice looks after so many people in the community so we’re delighted to be able to offer such a prize to lucky local winners in our special 25th anniversary year.

“The Draw has raised more than £40,000 for the hospice which will go straight back into paying for care services so it’s an amazing success.

“Thank you to all the people who bought a ticket and special mention goes to Cliff Dickenson & Son of Winsford, our local Ford dealership, www.cliffdickinson.co.uk. Their on-going support for us with the car prize and also the additional use of a promotional vehicle to spread the word at community events is invaluable.”

Cliff Dickenson & Son managing director Mr Chris Winward said the company was proud to help the hospice, a cause they have regularly supported since 2004.

Chris, who is celebrating 25 years with the company, said: “Our company has been based in the town since 1927 and many of our customers work at or have been patients at the hospice so it is incredibly important to everyone in the local area.

“It’s my 25th anniversary with the company and St Luke’s 25th year, so what better way to mark the occasion than with a wonderful and successful fundra