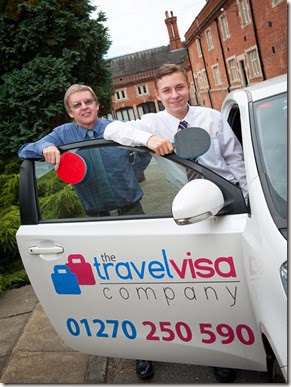 The rapidly-expanding and award-winning Crewe-based international visa specialist, The Travel Visa Company, is serving up another success after renewing its sponsoring deal with the Crewe & District Table Tennis League.

The new sponsorship deal will see the Crewe Hall based company, the preferred supplier to the UK's leading travel providers, continue as the league’s main sponsor for the 2013/2014 season.

The South Cheshire Chamber of Commerce Small Business of the Year, which employs 14 people at its HQ, is hoping to mark the renewal by winning the league with its very own team and go one better than its second place finish last year.

As the season begins, Karen Taylor, co-founder of The Travel Visa Company, said: “We’re passionate supporters of local sport and many of our team are a dab-hand with a table tennis bat!

“We have a joint team with Bentley Motors in the league and we’re very much looking forward to the new season and going head-to-head with South Cheshire’s best again.”

“We believe that, as a part of the South Cheshire community, it’s important that we do our best to support the great and active sporting community around us.”

John Dawson, Crewe & District Table Tennis League’s finance manager and The Travel Visa Company visa specialist, added: “On behalf of the league, I’m thrilled to have confirmed the renewal of this sponsorship deal and look forward to an action-packed season.”

The Travel Visa Company, has a turnover of over £1.2 million and an unrivalled reputation of supplying effective and efficient visa applications to both business and tourist travellers, is currently consolidating its market leading position with the opening of a specialised corporate visa department.

With 14 years experience of providing tourist visas and longstanding relationships with Embassies, High Commissions and Consulates in London, Birmingham and Manchester, the company has just launched a dedicated corporate division operation, to provide a bespoke service for UK companies in both the international export and import markets.

The company’s expert team will provide an exclusive and unbeatable service for all clients, personally collecting visas directly from embassies and delivering them to businesses and homes around the UK.

Specialising in both tourist and business travel to India, China, Russia and Africa, the Travel Visa Company, founded by Karen Taylor and Ray Ward in 2005, currently employs 14 staff at its Cheshire head office.

For further information on The Travel Visa Company, visit www.thetravelvisacompany.co.uk.