A ‘Bruce Grobbelaar in conversation’

A ‘Bruce Grobbelaar in conversation’ & book signing event took place at Malbank School in Nantwich on the evening of Friday 14th December 2018.

Former Liverpool and Crewe Alexandra goalkeeper Bruce Grobbelaar talked about his life inside and outside football and signed copies of his autobiography ‘Life in a Jungle’.

Bruce was born in South Africa. He served in the Rhodesian Bush War before moving to Canada to play football for Vancouver Whitecaps. He arrived in England, initially on loan at Crewe Alexandra. Later, Bob Paisley Liverpool FC’s most successful manager decided to sign him as a replacement for the great Ray Clemence. Grobbelaar spent nearly 15 seasons at Anfield where he won 19 medals - he is the most decorated goalkeeper in Liverpool FC’s 125-year history. Bruce now lives in Canada.

The event was organised by Nantwich Bookshop & Coffee Lounge located on High Street in Nantwich.

Event organiser Denise Lawson from the Nantwich Bookshop & Coffee Lounge said, “It was a very successful and enjoyable evening. Thank you to our staff and everyone at Malbank School who helped make this such a great event and to all the football fans who came to listen to Bruce Grobbelaar.” 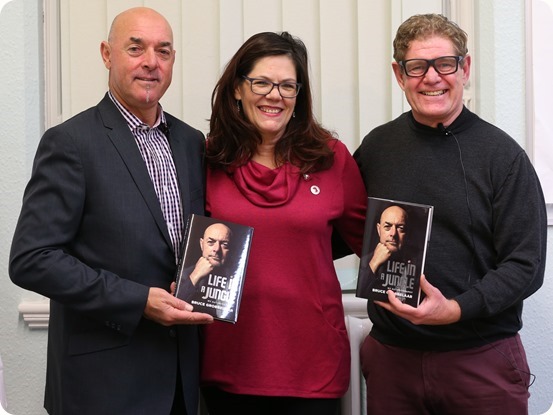