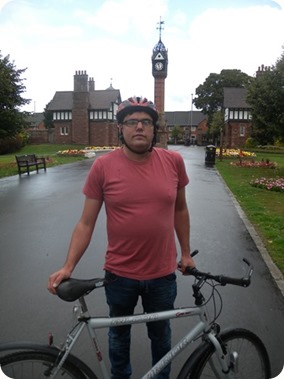 Sean Savage, a swimmer at Seahorse Swimming Club, has recently completed a gruelling 999 challenge by swimming 9 miles, walking 9 miles and taking on a 9 mile bicycle ride. He is fundraising for the N.W. Air Ambulance and has already been pledged £350.

He carried out his 9 mile swim over several weeks during his weekly swimming sessions at Seahorse. His 9 mile walk took place along part of the Sandstone Trail, and he clocked up 9 miles on his bike starting at Nantwich’s Barony Park and then along the Greenway to Queen’s Park in Crewe, where he rode three laps of the Park before returning to Nantwich.

Sean, who is aged 36 years and on the autistic spectrum, has been swimming at Seahorse for over six years. He has completed several sponsored swims at Seahorse in recent years, including for St. Luke’s Hospice and Sports Relief. Sean was encouraged by Alan Corbin, Terry Howard and Gareth Roberts during each of his challenges.

“Sean put lots of effort to complete this challenge. Although he is a strong swimmer and covered the walk with relative ease, riding a bike didn’t come easy for him, so to cycle nine miles was a fantastic achievement.” – Gareth Roberts, Seahorse Secretary.

Anyone who would like to support Sean’s 999 challenge can visit the Lifestyle Centre on Thursday evenings (7pm) during Seahorse’s swimming session or contact Gareth Roberts on 01270 629958.