Roy Price, 51 from Crewe, and Ian Jones, 46 also from Crewe, conquered Snowdon during a charity walk up the Welsh mountain on Sunday 9th September 2018. Despite challenging weather conditions and punishing physical effort Roy hauled and carried his wheelbarrow and Ian wore his bear costume to the top of the highest mountain in Wales with an elevation of 1,085 metres above sea level.

Roy and Ian are raising money for the Macmillan Chemotherapy Suite at Leighton Hospital in Crewe. Roy in memory of his wife - Ruth Price - who passed away in February this year from secondary breast cancer. Ruth was treated at the Macmillan Cancer Unit at Leighton Hospital. Ian in memory of his mother - Janet Jones - who also passed away from cancer.

The pair have thus far this year raised over £3,600 via pushing a 100kg wheelbarrow and wearing a bear costume respectively on a fourteen mile walk from Crewe to Nantwich and back, a garden party at The Woodside in Wistaston, a charity night at the Bombay Restaurant in Crewe, a tombola & raffle stall at The Co-operative Food in Shavington and the walk up Snowdon. Their target is to raise £5,000.

Later this month Roy will aim to climb the Mount Kilimanjaro volcano in Tanzania - the highest mountain in Africa. Roy has self-funded his trip to Mount Kilimanjaro, so all money donated will go direct to the Macmillan Chemotherapy Suite at Leighton Hospital with no deductions. Roy will also match the total raised via the Virgin Giving Money online page to make a personal donation to the local charity ‘The Shine Bright Foundation’ - http://www.shine-bright-foundation.org.uk/ - as this charity raises money to help fund trials for triple negative breast cancer and supports anybody receiving breast cancer treatment.

In readiness for Kilimanjaro Roy is receiving training from EDGE Travel Worldwide via their ‘Sofa to Summit’ programme which includes health, nutrition, fitness and training along with UK walks. Roy’s latest challenge was another part of his intensive training.

Roy Price, after the Snowdon walk, said: “The support we’ve received throughout this fundraising journey has been amazing - now it’s becoming unbelievable! It’s hard to put into words how we feel - Ian the bear and I have had a couple of crazy adventures, but Snowdon with a wheelbarrow on my back and Ian in his bear costume, that meant he could hardly see beyond his nose, was really crazy.

We followed the Ranger Path up Snowdon in horrendous wind and rain with visibility becoming pretty poor in places. I believe this route on a normal day takes around 6 hours. However, due to the weather, we stopped at the top to try to dry off for approximately half an hour, but despite that we still completed the walk in six and a half hours. I think that’s an amazing achievement considering I had the wheelbarrow strapped to my back on the way up and the bear couldn’t see far.

We had a tremendous support team - Ian’s wife, Sarah; Ian’s sister in law, Clare Everall; Sam Simpson and her daughter Kyra Simpson. These ladies were the absolute best friends I could have supporting me, they have never done this before and they’d not trained, but they came to support me, and despite the weather giving everyone a severe beating they refused to give up. We started as a team and we finished as a team. We were led and looked after by John Walker from EDGE Travel Worldwide, without whom this would have been near impossible. Another member of my support crew that deserves a special mention is Ellie Foster, who designed all the posters and banners and all the promotional advertising - it’s all her fantastic work. Various events have been taking place to support this fundraiser but we had two sponsors for this actual event: Simpson & Edge Garage from Nantwich and Screed Giant Ltd from Winsford.

I’m not sure if Snowdon will be the last combined outing for Ian and me, but it is the last fundraiser before I head for Mount Kilimanjaro later this month on 21st September. Ian is a fantastic friend that I’m so pleased to have around me. Since my wife Ruth passed away in February this year, Ian, Sarah and Clare have been there without question whenever I’ve needed support. They truly are the most fantastic friends, I could not have got where I am without them - for that I would like to express my grateful thanks.”

Carole Salmon, Community Fundraiser - ‎Mid Cheshire Hospitals NHS Foundation Trust, said: “I would like to thank Roy and Ian for their continued ‘crazy’ fundraising projects for the Macmillan Unit. I wish Roy all the best for his Mount Kilimanjaro climb later this month and urge the local community to help him boost his fundraising total if they are able.” 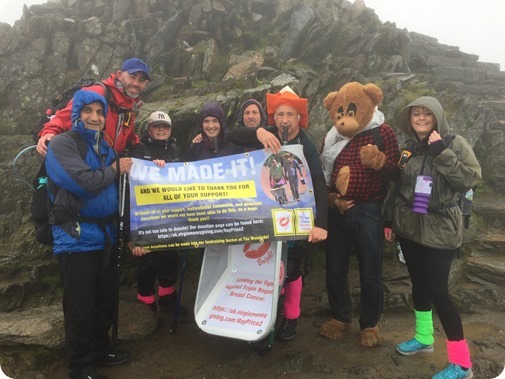