Looking after the Homeless

The Crewe and Nantwich MP Laura Smith and the Mayor of Crewe are planning to come and visit The Lath Group, a small Crewe based Charity looking after the homeless, who are holding an open day on Saturday the 8th of September from 10 am until 12 30 pm, at the Lighthouse Centre, 56 Stewart Street, Crewe CW2 8 LX.

This is a very special occasion for The Lath Group and their clients as their 90 year old founder and chairman is retiring and taking up a presidential role. The new joint chairmen John McManus and Piotr Martficki will be presenting Bernard and his wife Judy with a special gift and a plaque in grateful thanks from the clients and volunteers in recognition of their ten years of unstinting service to the homeless of Crewe and the surrounding area.

We have some interesting people calling in and a keep fit enthusiast and Gym owner is going to come with some of his clients and we can all have the chance to get some keep fit tips. Do come if you can and make this a fitting tribute to Bernard and Judy.

Herewith a potted history of Bernard Potter and how Lath came to be should you choose to use it.

Profile of the Author 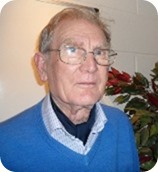 Bernard Potter is a retired accountant, who was born in Ramsgate in Kent, in 1928, where he lived until the age of 12, when he was evacuated to Stafford, shortly after the Dunkirk evacuation.

He served as a regular soldier in HM Coldstream Guards from 1946 to 1952, mainly on Public Duties at the Royal Palaces, and other important buildings, and also spent three years in Malaya on Active Service, during the Communist uprising between 1949 and 1951.

Later in life he took to playing folk music, and now arranges concerts as fundraisers for the LATH Group, and plays at various Church functions.

Bernard is a member of the SVP, and is the Chairman of The LATH Group, Registered Charity No: 1157729

The LATH (Looking After The Homeless) Group is a Registered Charity, born out of the Saint Vincent de Paul Society, Crewe Conference.

Before I explain more about LATH, I need to give some details about myself, and how I came to be involved.

I am an Anglican in a Roman Catholic environment. My wife, Judy, is a devout Catholic, and for some years now, I have been attending St Mary’s Church of the Immaculate Conception in Crewe with her. Apart from actually converting to Catholicism, I feel very much a part of the Church.

I am on a journey, which began six years ago, in 2008, when Judy said that she would like to visit Lourdes for our annual holiday. In her younger years she went there regularly as a Carer on an annual pilgrimage. I thought that was a good idea, having never been there myself, and being aware that it is located in a beautiful part of France, at the foothills of the Pyrenees mountains. I pictured days out, touring the surrounding areas and enjoying the beautiful scenery of the mountains. It did not turn out like that!

We actually spent a half day trip to the mountains, and the whole of the rest of the week was spent in Lourdes itself, shopping, eating, attending Masses, and taking part in evening torchlight processions.

Lourdes is a hugely commercial, but immensely devout city, with hundreds of shops selling a large range of religious memorabilia, but make your way through the busy shopping area and enter the park, and you are into a different world, containing several Churches, including the impressive underground Basilica, the famous Grotto, the Stations of the Cross, and the river, which one can sit beside and peacefully reflect.

I have never had so many Blessings in my life as I had in Lourdes, including one on the bridge in the centre of the City, where a Swiss priest had stationed himself, who actually anointed me with Holy Oil, and presented us both with Rosaries, and a religious picture.

Shortly after our return, there was the annual appeal on behalf of the St Vincent de Paul Society (SVP), for funds, and volunteers. Perhaps, inspired by my visit to Lourdes, I volunteered to become a member.

Shortly after that, the SVP invited a Salvation Army Officer to come and give a talk about the wonderful work the Army does.

There were three points that emerged from the talk:

The first, that within Crewe and Nantwich, there were no hostels or night shelters for homeless males over the age of thirty – shelter had to be sought in neighbouring towns, or they slept on the streets.

The second, that drop-in facilities, to provide food, advice, and other help such as showers, and clothing, were only available on Fridays and Mondays, and only in the Salvation Army Citadel.

The third, is that the Army had gone through a period of practising austerity (being a little bit mean, or at least somewhat frugal regarding spending money) due mainly, to funds seemingly drying up. Suddenly, after reviewing the situation, they had decided to dispense with caution, and be as generous as they were able, believing that the Lord will provide. And lo and behold, funds started to flow in again. As an accountant I, personally, would have difficulty in trusting my belief to that extent!

The first and second points caused considerable concern amongst those present and, following the SVP motto “Turning Concern into Action”, we decided to address the problems, and took the following actions:

The meeting was held on the 4th December 2009, attended by 23 people, including our local MP The Rt Hon Edward Timpson, and representatives of various bodies, including the Salvation Army, YMCA, Samaritans, Churches Together in Crewe (CTiC), the Police, and the General Public. (Many other organisations have ‘come on board’ since) It was at this meeting that LATH was formed, and some initial actions were agreed:

· To establish the extent of homelessness in the Crewe area.

· To define what facilities already exist.

· To establish what the needs are for more facilities.

· To formulate an Action Plan for the future.

The need for more facilities became apparent from an early stage, mainly from statistics then being compiled by the Salvation Army, which indicated that, on average, at least 12 people were consistently recorded as being ‘of no fixed abode’, of which 6 would be sleeping rough, and six ‘sofa surfing’ – staying on a temporary basis with family or friends.

This caused the initial focus to be in trying to create a night shelter. Suitable premises were quickly identified – a disused former surgery, which already contained eight doctors consulting rooms, and two nursing rooms, all with plumbing and washbasins, and a large waiting area, suitable for dining and recreation, although quite a lot of vandalism had taken place.

Sources of possible funding were identified, which were actually targeted at solving problems of homelessness but, unfortunately we drew an immediate blank. We were informed that night shelters in particular were a ‘no go’ area as far as national and local government were concerned. There were even plans afoot to shut down existing establishments, the current thinking being that homelessness should be able to be catered for by social and private housing.

That situation has not changed, and although some initiatives have had funding, such as the ‘No Second Night Out’ scheme, this was, and still is, only available to those recently made homeless, or those under threat of being made homeless. There is still little on offer for long term rough sleepers. They can, of course, register with Homechoice, which means they are able to ‘bid’ for accommodation, but are allotted such a low priority rating that it is virtually impossible for them to obtain anything.

· Met on a regular basis with Cheshire East, other organisations with whom we liaise, and Volunteers.

· Produced a ‘signpost’ poster, listing organisations we liaise with, and brief details of the services they offer (see illustration)

· Produced a formal Constitution, with the Rt Hon Edward Timpson MP, as our Patron.

· Been instrumental in the introduction of the Churches Together Winter Night Shelter scheme.

Towards the end of 2011, we were able to reach agreement with Fr Bill Baker, to use the Christ Church Parish Hall, in the centre of Crewe, as a Drop-in Centre for Homeless, Lonely and Vulnerable people. For a period of about fourteen months we provided morning tea, coffee, toast etc., a cooked lunch, leisure facilities, such as Newspapers, Cards, Dominoes, and Pool, and a range of assistance and advice, including help with Benefit queries, Accommodation, Job seeking etc., and more practical help with tents, sleeping bags and clothing.

This came to an abrupt end when Cheshire East Council decided to acquire the site to develop a ‘Lifestyle Centre’, and we were asked to leave.

Due to the kindness of Fr Jerome, of St Mary’s Church, and Rev David Edwards, of the Church of the New Testament, we have been able to keep the drop-in centre going temporarily in Church premises. 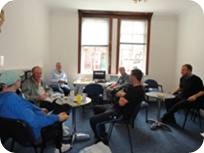 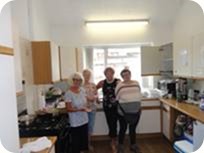 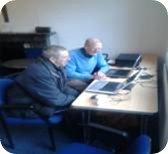 1. Volunteers and Guests enjoying a meal and a chat

2. Some of our lady volunteers in the kitchen

4. Helping a guest with an online application

We have recently been granted full Charity status, and are now A Charitable Incorporated Organisation, and are also in final stages of negotiations of obtaining a three year lease in an ex retail premises, which will be our own place at last. These need a fairly major refurbishment, at significant cost, towards which we would be grateful for any donations.

Finally, we have definitely not given up on the initial objective of developing a night shelter or similar, to ‘Ease the plight of the Homeless in the Crewe and Nantwich area’

If you would like to find out more about LATH, or would like to help in any way, please pick up a leaflet from the Church foyer, or visit our website at www.lathgroup.org.uk . News about LATH is regularly featured in the Church newsletter.