A group on Facebook are trying to clean up Crewe and stop fly tipping which is a major problem. We have reported before on the Mother and Baby Unit in Oxford St which houses new born babies were for the past 12 months rubbish is tipped twice a week at least. In warm weather it then gets flies and maggots from the nappies and food waste. Environmental health say its nothing to do with them and its not a health risk how they can say that when its new born babies a few feet away? 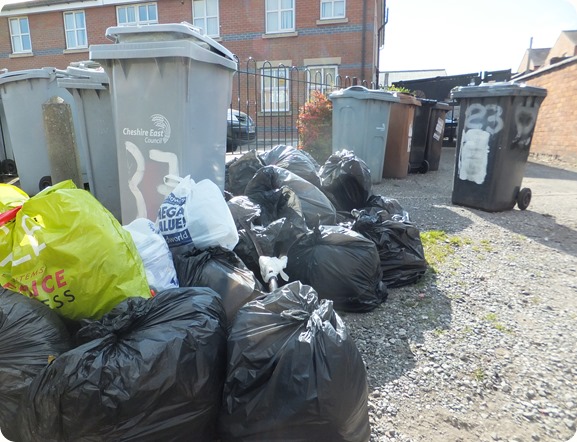 The problem has been reported many times to ANSA, local councillor and wardens. The CEC send a van every week to pick u the rubbish how much does that cost the tax payer? The wardens come and there is evidence who is doing this but they claim they cant prosecute every other council does so we not CEC? A complaint has gone into the council on this matter as they dont have to live with this mess every week and they should be taking action.

Its the same in other areas of Crewe and its down to the fact the CEC dont take action and of course the people who fly tip. One problem is a lot of foreign people live in the areas and they think its acceptable or dont know any better in this case its down to wardens to trace them and educate them. The other side is a cost one if your poor maybe on the dole and get a new bed what do you do with the old one? You dont have a car and if you ask CEC to remove it they charge you and as you cant afford that your only option is to dump it which often turns into a fire as people set them on fire and in the west end there have been some really bad fires over the years. You used to be able to report rubbish on a free phone number but now you dont know what your paying for.

This is an update that I posted on  www.facebook.com/groups/Creweflytipping.

"On Tuesday 19th January Gary Palin and myself went to the Crewe Town Council meeting and took advantage of the public speaking session. We presented the feelings expressed on this Facebook page and our own. I would say that we felt that we had unanimous support from the Town Councillors for the issues that we raised and it was suggested that we attend a Cheshire East Council meeting. This morning we went to the Environment Overview and Scrutiny meeting at Cheshire East headquarters and again took advantage of the public speakers slot. We gave a presentation to the committee expressing feelings from what we have learnt over the last week. We put forward proposals but no discussion took place. However, we were then invited to address the Fly Tipping Task Force meeting this afternoon where discussion did take place and we learnt how to proceed. The key at the moment to progress this issue is to keep the photos coming in and we must report all instances via the Council web site."

There is a partition at www.change.org/p/eliminate-fly-tipping-in-crewe

and the signatures rose from 213 to 220 since the article that appeared in this weeks Crewe Chronicle. Either Crewe residents are not aware of what's going on or they don't care. I'd like to believe that they do not know.