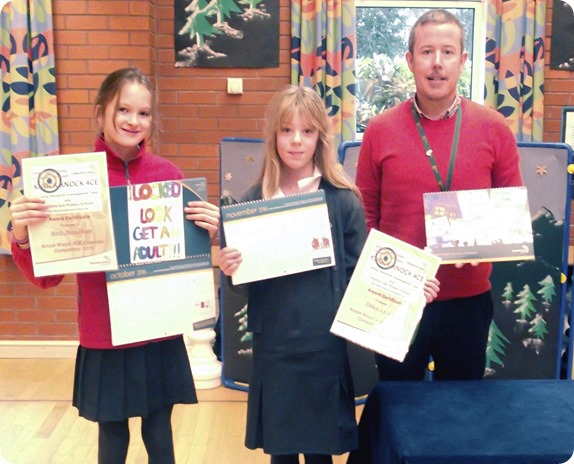 Children at 25 schools across Cheshire East can start 2016 feeling proud after taking part in a Borough-wide safety campaign themed around the dangers of doorstep callers.

Cheshire East Council’s trading standards team has, once again, delivered a major project in schools to alert children to the need to keep doors and windows locked and to be wary of bogus callers and suspicious visitors.

The ‘Knock Knock’ campaign is run in schools each year by the Council’s trading standards officers who, in 2015, involved nearly 800 children in presentations and an arts competition. This resulted in the creation of a colourful calendar carrying important messages around doorstep safety.

More than 240 year five and six pupils entered the calendar competition and 36 of the entries were chosen to form the 2016 calendar.

One of the judges, Councillor Les Gilbert, Cabinet member for communities, said: “Once again standards were very high and the task of judging the best entries was extremely challenging.

“As a Council, we have been running this campaign for five years now and it is clear that it is extremely effective in getting important personal safety messages across to people young and old.

“I would like to express my personal thanks to all those schools and pupils who took part and wish you a happy and safe new year.”

All pupils who submitted an entry received their own calendar, with the winning entries also receiving a certificate and a water bottle in a presentation ceremony during school assembly.

Pupils were also encouraged to give calendars as Christmas presents to elderly relatives, who can often become unsuspecting targets for rogue doorstep callers.

For more information and to download a copy of the calendar visit www.knockknockwhosthere.net