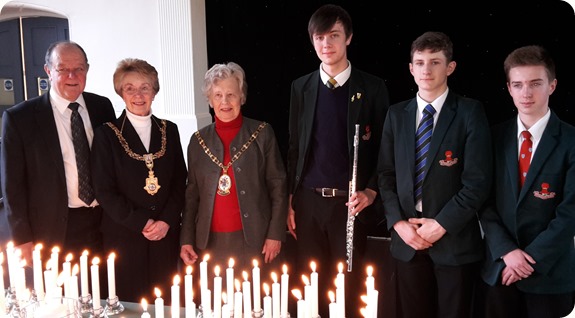 Around 75 people, including dozens of members of the public, attended the ceremony. The Council decided in 2013 to make this an annual commemoration by the authority.

Holocaust Memorial Day has taken place on the same date since it was introduced in 2001. January 27 was chosen as this was the date when the Nazis’ notorious Auschwitz concentration and extermination camp complex was liberated by Soviet troops in 1945.

The Holocaust resulted in the annihilation of six million Jews, two million Gypsies, 15,000 homosexual people and millions of others by the Nazi regime and its collaborators.

Since 1945 there have been many other attempted genocides across the world and these are also commemorated on Holocaust Memorial Day.

Cllr Brown said: “This was a very poignant and necessary occasion for remembrance and reflection on man’s inhumanity to man.

“This ceremony allows communities and individuals from across Cheshire East to join together, symbolically, to remember these human tragedies and bear witness.

“Tragically, as the recent terrorist attacks in Paris and Jakarta make all-too-painfully clear, humankind is still blighted and brutalised by beliefs that religion, race, political outlook, disability or sexuality make some people’s lives ‘worth less than others’.

“We come together each year to bear witness to the unspeakable horrors to which such unacceptable and evil beliefs can lead. The road to genocide is a gradual journey – which can begin if discrimination, dehumanisation and hatred are not prevented.”

The act of remembrance included readings, music, lighting of candles to the victims of genocide and two-minutes’ silence, followed by the tolling of a bell and prayers.

A Hebrew prayer was read out by Rabbi Chanan Atlas, of the Yeshurun Hebrew Congregation, of Cheadle and Gatley, in Cheshire.