Mothers and babies in Danger

A women with a baby in a double buggy was forced onto the road due to this caravan being parked on the footpath in Ford Lane Crewe. As a result of this the baby was nearly hit by a car as she had to come out behind the caravan to cross the road. 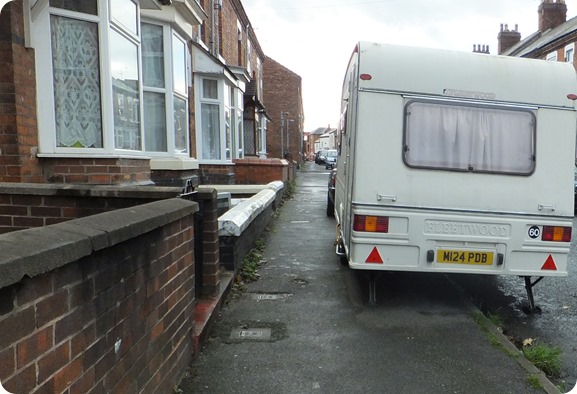 You MUST NOT park partially or wholly on the pavement in London, and should not do so elsewhere unless signs permit it. Parking on the pavement can obstruct and seriously inconvenience pedestrians, people in wheelchairs or with visual impairments and people with prams or pushchairs.

The Highways Act 1980 (section 66) included an obligation on councils to “provide in or by the side of a highway … a proper and sufficient footway as part of the highway in any case where they consider the provision of a footway as necessary or desirable for the safety or accommodation of pedestrians.”
A caravan must be lit if it’s parked on the highway overnight, with the nearside facing the pavement with rear lights facing oncoming traffic.
Parking caravans on the street can cause a number of problems, for example they may:

block the street illegally
be a safety hazard to pedestrians, particularly children
prevent or limit access for other vehicles
block windows and shut out daylight
be an eyesore
be dangerous, for example if they are unstable or have gas cylinders attached
If a caravan is illegally parked or is causing a problem, Council officers will investigate to find the owner and see why it is parked on the street. The owner will be asked to remove the caravan and will then be sent a notice requiring it to be moved within 14 days (a copy will be attached to the caravan)

One has to consider are there gas bottles stored in the caravan , is it insured if it fall or causes an accident can they pay legal cost and compensation. Experts say a caravan must be parked level but this isnt as its half on the pavement and they say that makes it dangerous.

The issue is on going with a lively debate on Twitter the bottom line is if someone gets killed or hurt who do they sue the council, Police owner?