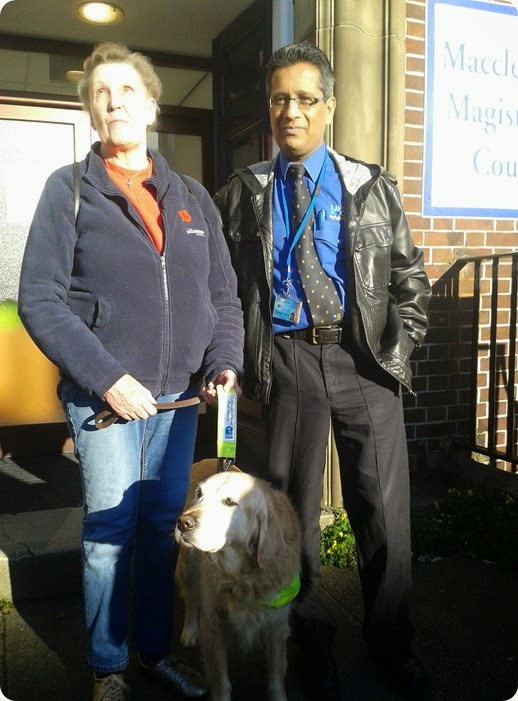 A taxi driver who refused to let a blind woman pensioner and her guide dog into his cab has been ordered to pay out nearly £800 after a landmark prosecution brought by Cheshire East Council.

The Guide Dogs for the Blind Association says such prosecutions are very rare, because of the difficulty identifying offenders – and is not aware of any similar prosecutions in Cheshire or Merseyside in recent years.

Retired nurse Patricia Powell, who is registered blind, had gone to a taxi rank on Exchange Street, Macclesfield, hoping to get a cab home.

She was accompanied by her golden retriever guide dog Yates and Tesco security officer Yogendra ‘Yogi’ Patel, 42, who was helping her with her shopping bags.

Macclesfield Magistrates’ Court today heard that a licensed Hackney cab driven by 55-year-old John Derek Mycroft was at the front of the rank.

Mrs Powell and Mr Patel heard him say: “I’m not taking the dog, get in the next taxi.”

In a statement read out in court, Mrs Powell, who has been blind for 18 years, said she felt ‘frustrated and discriminated against’.

She added: “My guide dog is my constant companion and I would be lost without him.

Yates is with me at all times as he is my mobility tool – not my pet. I need him to be with me, to be my guide.

“This is the sixth time that I have been refused access to a taxi now, as a result of having my guide dog with me.

“Luckily, in this case there was another taxi available to carry me but it worries me that this may have occurred at night when I was on my own and I could have been left in a dangerous situation.

“The incident has left me feeling very anxious and nervous about travelling by taxi, in case the issue occurs again, and has caused me significant upset. I would also hate for this to happen to another guide dog owner.”

The driver behind Mycroft on the rank took Mrs Powell home. Both he and Mr Patel provided statements supporting her complaint.

Mrs Powell complained to Cheshire East Council’s licensing officers, who invited Mycroft and his employer to an interview.

When questioned, Mycroft claimed that he did not want to miss out on an upcoming pre-booked job and was looking for a customer who only required a short journey.

Mycroft, of Brocklehurst Way, Macclesfield, today pleaded guilty to refusing to take a passenger from a cab rank on April 24, 2014 ‘without reasonable cause’ – an offence under the 1847 Town Police Clauses Act.

Mr Stephen Rodgers, defending, said in mitigation: “Mr Mycroft accepts he should have taken Mrs Powell and her dog and he regrets the decision he made.

“This is not an experience he wishes to repeat and he is aware that he made the wrong decision and he has no problem with transporting blind people in his taxi.”

Magistrates imposed a fine of £100 with an additional victim’s surcharge of £20 and ordered Mycroft to pay £665 prosecution costs.

The chairman of the magistrates’ bench thanked Mrs Powell and Mr Patel for attending the hearing, adding: “It is most appreciated that you came today and we wish you all the best, Mrs Powell – and your dog too.”

The prosecution was brought by Cheshire East Council’s legal team.

Speaking after the case Mrs Powell said of Mycroft’s sentence: “I think he deserved it. Even now, I feel apprehensive about taking taxis, if I don’t know the driver.

“I’m glad he pleaded guilty – but that’s not the point. The point is: blind people should not be discriminated against.”

Councillor Les Gilbert, Cheshire East’s Cabinet member in charge of localism and enforcement, said: “It is completely unacceptable for blind people to be discriminated against and put at a disadvantage in this way.

“I am pleased that the Council’s licensing officers were able to bring this matter to court. It sends out a powerful message to other taxi drivers about their obligations.

“The taxi trade provides a valuable social service and is expected to be sympathetic to vulnerable passengers in general.”

A spokesperson the Guide Dogs for the Blind Association added: “We are delighted that Cheshire East Council has taken action on this issue.  When a guide dog owner is refused access to a taxi, this often leaves the person feeling discriminated against and can lead to a blow in their confidence to travel by this vital means.

“We hope that this case will help remind other drivers and service providers of their duties.”