WISTASTON ROAD JUNCTION TO GET A SAFETY RETHINK

Cheshire East’s Wistaston Ward Councillors Margaret Simon and Jacquie Weatherill have met with Highways Staff and representatives from the local Parish Council, Sustrans and ActiveTravelCrewe at the A534 Crewe/Nantwich Road junction with Broughton Lane to discuss safety concerns, especially for cyclists. Broughton Lane is busy and often has queuing traffic, at peak travel times, whilst vehicles are trying to get out on to Crewe Road. The A534 cycleway passes across the edge of the junction and as vehicles are trying to turn our of Broughton Lane they compromise the cycleway pushing cyclists further out into the road.

“This junction has been a concern to me for some time. I’m a keen cyclist, who regularly uses the A534 Crewe/Nantwich Road. The way the cycle lane is marked out is not ideal. I think it needs to be reconsidered and improved. We cyclists have to be very careful that we don’t ride straight into the path of a vehicle trying to turn out on to Crewe Road.”

“There was no better way of understanding this problem than going out, during the busy early morning traffic rush, to observe the junction being used. Having the cycling experts on hand to point out why they consider it to be unsafe helped us to understand why they think it is dangerous. Our Highways Team will now take away the comments made and draft a scheme of improvements to bring back to us all to consider and agree a way forward.”

“Margaret and I would like to thank everyone for turning out so early on a very cold morning in order to have their say about this junction. This is a really good example of partnership working. If we want to encourage sustainable transport for as many people as possible it is of paramount importance that they feel safe using our local cycleways. Many more issues were raised by residents at the recent Consultation Day, there will be more recommendations coming forward from it in the next few weeks.” 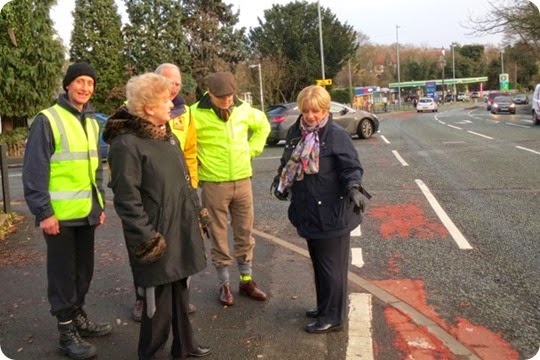