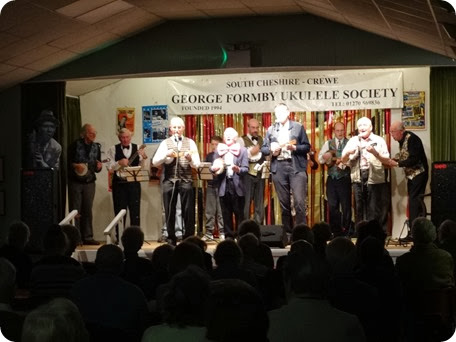 They are so popular that people smash the windows when the practice so they can hear better.

The concert contained group, duet and solo ukulele performances and featured well-known George Formby songs such as 'Chinese Laundry Blues', 'When I'm Cleaning Windows' and ‘Leaning on a Lamp Post’, along with songs by other well-known artists.

Performers came from Crewe, other parts of Cheshire and counties beyond. There were also two audience members on holiday from Adelaide in Australia, who were entertained with ‘Waltzing Matilda’ and ‘Tie Me Kangaroo Down, Sport’.

Alan Newton was Master of Ceremonies and introduced each act with a quick fire repartee. Cathy Darlington was the Concert Producer.

Hot and cold drinks and a wide range of refreshments were served during the interval.

There were over 100 attendees.

Society Founder Brian Edge said, "I encourage anyone to attend one of our Concerts or rehearsal sessions which take place throughout the year. You will be made to feel most welcome. Feel free to bring a friend along with you; you are sure to have a pleasant surprise."

The Society was founded in 1994 and performs a concert at Wistaston Memorial Hall on the fourth Friday of every month throughout the year. There are no membership fees to pay to attend a concert and the entrance fee is just £1 to cover the cost of rent and refreshments. The 2014 concerts all start at 7:30pm prompt and take place on 24th January, 28th February, 28th March, 25th April, 23rd May, 27th June, 25th July, 22nd August, 26th September, 24th October, 28th November, (Saturday) 27th December. In 2014 the Society will be celebrating twenty years of monthly concerts in the Hall.