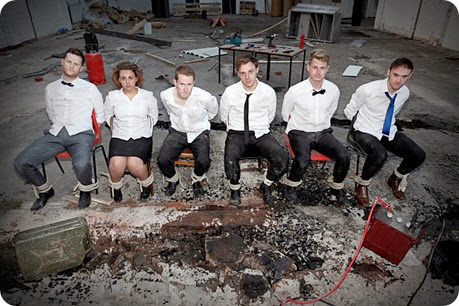 A week ago, a sinister image of six people appearing to be held hostage was released.

Now, following a week-long campaign across social networking, the mystery guests at this Sunday’s BOXjam event in Crewe have been revealed.

More than 25 bands and artists will be performing across two stages at the annual charity fundraiser at The Box, Pedley Street.

And joining the likes of headliner George Borowski, Son of Shinobi and Hex is South Cheshire’s new alternative six-piece – likely to raise a few eyebrows among those interested in the local scene.

Moving Moscow is all about second chances – uniting former members of Sgt Wolfbanger, Sumo Kings and The Retrospective.

“It was just waiting to find the right musicians.

“The name came from an article I’d read about Moscow – being a city with a lot of potential and despite the investment, couldn’t become the next New York, Paris or London.

“Individually we’ve been lucky enough to play in some decent bands and for one reason or another, things didn’t work out.

“That’s what has united us – we’re seeing this as a second chance to have a crack at it.”

When The Box first opened five-and-half years ago, Wolfbanger were arguably alongside Rig Up Explosive (now Blitz Kids) as the pick of bands to push on.

The Sumos were a band that did things their own way, supporting many of the big names (Feeder/The Bluetones) to arrive either at the venue or the old M Club.

“It doesn’t sound like anything any of us have done before,” he continued.

“We’ve all been keen to get the standard as high as possible from the off.

“I’m really excited about performing these songs, it’s a lot more ballsy than what I used to do and I think the heavier sound suits us all.

“I’ve got older and the lyrics we’ve worked on have much more of a story-telling aspect to them.”

Parry says BOXjam is the perfect opportunity to kick things off.

“We’ve been all so busy writing, we weren’t sure when to test run the tracks to introduce ourselves back into the scene,” added Parry.

“To go in mid way through the event is perfect for us and the fact that it’s such a good event supporting those charities is a real bonus.

“We’ll be looking to get in maybe one or two more gigs before returning to The Box in December.”

Supporting both Oxfam and The Christie, BOXjam opens at 12pm, with admission £3. For more information, visit www.theboxcrewe.co.uk and www.facebook.com/boxjam