Reporter Jonathan White, Crewe The 'Killer Mile' - http://www.mowcop.info/killermile/killermile.htm - took place at Mow Cop on the evening of Thursday 9th May. In this annual event a total of five hundred runners started at Station Road and hauled themselves up hill to the finish at Mow Cop Castle. The event is organised by the Mow Cop Residents Association http://www.mowcop.info/residentsassociation/main.htm - and consisted of six running races with the Junior Fun Run (up to 11 years) on a shortened course, followed by the full mile for Under 18's, Club Runners, Adult (over 18) Races 1 and 2 and Veterans (over 40). 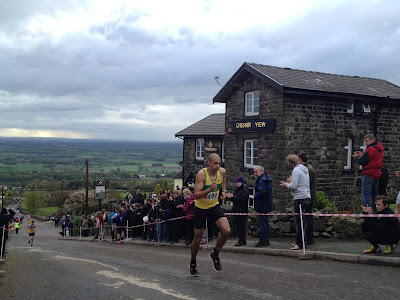 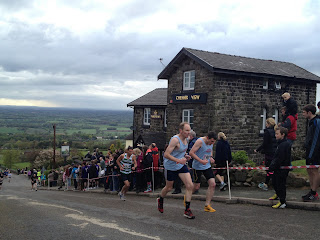 Several hundred spectators lined the route and Jack Williamson, aged 11, who runs for Crewe & Nantwich Athletic Club - http://www.creweandnantwichac.org.uk/ - won the Junior Fun Run. I understand Number 477 who won the Club Runners race immediately returned back down the hill to the start line and then won an Adult Race! There were numerous representatives from South Cheshire Harriers http://www.southcheshireharriers.org.uk/ , and teams representing the Royal Marines and the Territorial Army. Several runners wore fancy dress including a Queen Victoria and Nintendo's mascot Mario and many were raising money for charity including Caudwell Children http://www.caudwellchildren.com/ . Tim Wedgwood presented his BBC Radio Stoke evening show live from outside the 'Cheshire View' pub at the steepest section of the route and interviewed several participants and spectators. Race photos will be available from Bryan Dale http://www.racephotos.org.uk/ . Race results will be published at http://www.mowcop.info within seven days of the event.


Winners of the Junior Fun Run were Jack Williamson and Ebony Windsor.
The under 18s winners were Jacob Brown and Sophie Goodfellow. The club runners race was won by Steven Vernon – in the fastest time of the night in six minutes 40 second – and Wendy Swift.
The first adult race was won by David McGuire and Sarah Grant with Neil Gerrity and Mandy Vernon coming out on top in the second race.
Winners of the veterans race were Edward Davies and Emma Timmis.
All the money raised is put back into local community projects such as flower planting and the Christmas celebrations.