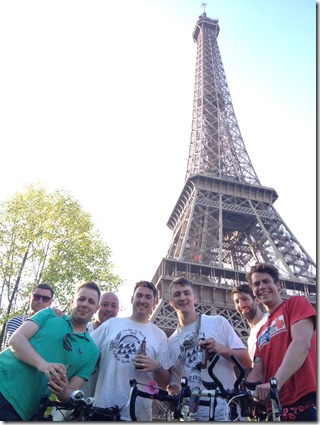 Will, 32, who lives in Tarporley, and Marcus 32, who lives in Lymm, and six friends, completed the challenging 250-mile ride in aid of The Manchester Adult Cystic Fibrosis Centre, in memory of their close friend, Liz Gardner, who passed away following a long battle with the condition, aged 30 in 2010.

The team of friends, who admit that their usual exercise consists of ‘lifting pints and walking around pool tables’, had originally set themselves the target of raising £2,000 but had already beaten that by the time they returned home, with a total of £2,380 donated so far.

Will explains: “We set off from Trafalgar Square at 9am on the Saturday and arrived in Paris at 6pm on the Monday. It took a further 40 minutes to find the Eiffel Tower.”

It is a regional specialist unit and treats patients from all over the North West.

Will explains: “It was a really tough challenge but we were determined to raise as much money as we could for a charity that is close to our hearts, The Manchester Adult Cystic Fibrosis Centre.

“Liz had Cystic Fibrosis. The condition meant that she battled through everyday, but she was a person that never once showed any day was a challenge.”

“The condition is one of the most common life-threatening genetic disorders, affecting around 8,500 people in the UK. Each week in the UK, three young lives are lost to Cystic Fibrosis.

“It primarily affects the lungs, with repeated chest infections and breathlessness, but also affects nutrition, diabetes, bones and joints. The many different organs that can be affected mean that optimal care requires input from a range of different specialists and, of course, that costs money.

“All proceeds are going directly to the wards that helped the wonderful Liz Gardner at the Wythenshawe Adult Cystic Fibrosis Centre.”

You can still sponsor Marcus, Will and the team by visiting their JustGiving fundraising page at http://www.justgiving.com/cycleforcysticfibrosis.