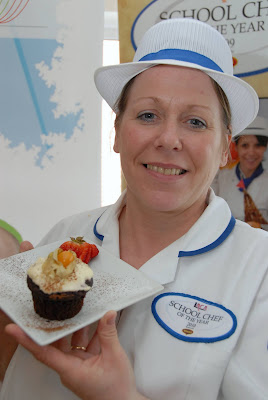 The culinary talents of a Cheshire East catering supervisor have won her acclaim in the North West heat of the School Chef of the Year Awards.

She competed alongside seven other school chefs from across the region to cook a low-cost, healthy two-course meal for 11-year-olds under timed conditions.

Her main course was chicken and hidden vegetable lasagne with salad and garlic, lemon and chive bread.

The contest, held at Knowsley College, was judged by a chef, a dietician, a local authority catering expert and two 11-year-old pupils from a local school. Lancashire’s Glen Moody was named overall winner.

Debbie, a catering supervisor at Warmingham Primary School, progressed to the regional heat after she was crowned Cheshire East School Chef of the Year last October.

“I was thrilled that the judges chose my dessert for the highly commended award, particularly given the high standard of all the entries,” she said.

“I have thoroughly enjoyed my experience in the School Chef of the Year contest and I wish Glen the best of luck in the national final.”

The annual School Chef of the Year competition is organised by the Local Authorities Catering Association (LACA).

The contest is open to all kitchen-based staff employed by organisations that are full members of LACA and are involved with the daily preparation of school meals.

Judging is based on eight strict criteria that range from flavour and presentation to the ability to replicate the dishes en masse in school.

Councillor Paul Findlow, member with responsibility for chidren and families, said: “Debbie’s tasty meals have been a big hit with judges in both the Cheshire East and regional heats and I would like to congratulate her on her success.

“She is a wonderful ambassador for the School Meals Service in Cheshire East and its many staff who work extremely hard creating appetising and nutritious meals for our thousands of pupils.”