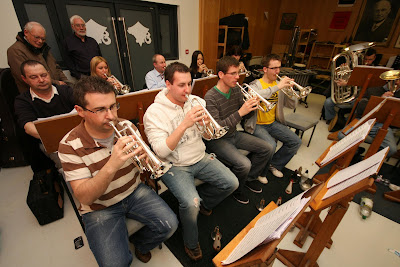 Sandbach’s world famous Foden’s Brass Band has received a chorus of Cheshire East congratulations after becoming North West record breakers.
The band won its fifth consecutive championship after fighting off competition from 11 rivals in the North West Area Contest held at the Winter Gardens in Blackpool.

The band – currently ranked second in the world - has now surpassed the record held by the legendary CWS (Manchester) band of the 1960s.
Cheshire East Deputy Mayor Gordon Baxendale said: “My warmest congratulations go to Foden’s Band for yet another incredible achievement.

“This latest triumph follows on the heels of Foden’s rise to second in the world in the international brass band rankings last year.
“The whole of Cheshire East is extremely proud of their achievements and we wish them the best of luck in the national finals.”

Band members were guests of honour at a reception to celebrate their achievement at the Sandbach headquarters of flooring company Flowcrete, which has provided the band with rehearsal rooms.
Mark Greaves, Managing Director of Flowcrete and Vice President of Foden’s Band, said: “We are delighted with Foden’s success and proud to be associated with this world class band.”
Foden’s will now go head to head with seven other regional winners in the national finals to be held at the Royal Albert Hall in October.
Mark Wilkinson from Foden’s Band said: “We have been runner-up at the nationals for the last three years. We hope to go one better in 2010.”

The band - named because of its links to the former Foden Truck company - has now won 17 North West titles including an incredible eight out of the last 10 competitions.
Posted by Jan Wright at 23:03