The Donna Louise’s Ambassador Supporter Graham Witter has raised an incredible £26,760.00 for local children and young people with life-limiting conditions, by once again transforming his family home in to a magical light spectacular

In December, for the sixth year running, 24 year old Graham organised the Weston Christmas Light Display at Carters Green Farm, in Weston transforming their family home and garden into a Winter Wonderland with thousands of twinkling lights and decorations.

Each year Graham creates the amazing display in memory of his sister Jessica, who spent time at The Donna Louise Hospice in Trentham. Since it first began in 2013 the display has grown every year and has become hugely popular, with more than 15,000 people visiting the farm in December alone.

The success of December’s display has taken Graham’s overall fundraising total for the hospice to a jaw-dropping £92,310.00 in the six years since he founded this community event.

Graham said, “I’m so grateful to each and every visitor who has visited my festive fundraiser and donated generously to help make this year’s event another resounding success. I’d also like to say a massive thank you to principal sponsor, Swansway Motor Group, event partner, Whitby Morrison and to all the local businesses who generously sponsored and supported the event. But a special mention must be to my family, friends and amazing volunteers who gave up their own time to support me throughout December.

“The display involves hundreds of hours of hard work, and months of planning and preparation beforehand – but to know that it’s brought festive cheer and laughter to families across our local community makes all the hard work worthwhile. Having welcomed more new visitors than ever-before, it’s humbling to see so much love and support for a charity which is so close to our hearts”

In addition to experiencing the thousands of colourful lights and animated decorations, visitors to the display, were able to visit Santa’s Grotto, indulge on a #festiveicecream and have their own #sleighselfie with Santa.

Simon Fuller, Chief Executive of The Donna Louise, said, “I am completely blown away that Graham has raised such a fantastic amount of money this year, what a wonderful achievement in memory of his sister. I know that it takes him months of planning and weeks of hard work to put all the decorations and lights together and I’m so grateful for his dedication. On behalf of all the children and young people, and their families, who will benefit from this money, I’d like to say a huge, heartfelt thank you to Graham.”

The £26,760.00 that Graham has raised will fund a learning disability nurse and provide 2 ‘sign and symbol’ communication workshops for staff. 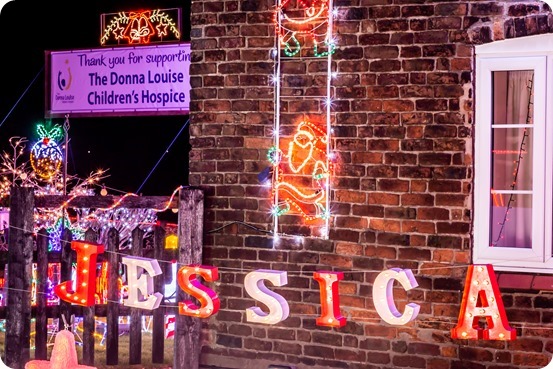