Roy Price, aged 50, successfully pushed a 100kg wheelbarrow fourteen miles on Saturday 30th June 2018 to raise money for charity. Roy was joined by friend Ian Jones, aged 46, from Crewe, who was dressed as a bear and carried a donation bucket.

They both raised several hundred pounds for the Mid Cheshire Hospitals Charity during ‘The Crazy Wheelbarrow walk’ and nominated the Macmillan Chemotherapy Suite at Leighton Hospital in Crewe to benefit from the money raised. Roy trained for the event by walking up Snowdon, the highest mountain in Wales, and by walking the 34-mile-long Sandstone Trail path in a day.

Roy and Ian started their gruelling physical challenge from The Raven pub on Brookhouse Drive in Crewe, then followed a route that included Fuller Drive, Laidon Avenue, Broughton Lane, The Woodside pub on Valley Road, Wistaston Green Road, Crewe to Nantwich Greenway, Barony Park, Nantwich town centre, and back to The Raven pub via Crewe Road, Church Lane, The Woodside pub (again), and Dane Bank Avenue. Refreshments were provided by Cafe 27 on Beam Street in Nantwich at the half-way point. Roy’s printed shirt was provided by Cheshire Work & Leisure Wear Ltd. Despite blisteringly hot conditions, during a UK heatwave, they completed their journey in an impressive nine hours.

Roy will also match the total raised and make a personal donation to a local charity - The Shine Bright Foundation - who raise money to help fund trials for to aid the research into Triple Negative Breast Cancer and support anyone receiving breast cancer treatment.

Roy Price said: “Despite the hot weather myself and Ian were determined to finish the walk. Ian went above and beyond as it was hot pushing the wheelbarrow but must have been very uncomfortable dressed as a bear - his wife Sarah followed our progress and brought cold water to us at various locations throughout the walk. Ian’s mum was the most fantastic caring lovely person you could wish to meet, and she was also one of Ruth’s best friends - it was an absolute honour to have Janet as a friend. We thank everyone for their fantastic support. I now look forward to my next challenge which is scaling Mount Kilimanjaro. I had never walked up a mountain in my life until I did Snowdon a few weeks ago. After spending 30 years with Ruth I had become lost in a whole lot of emotion and I’ve used the challenge of climbing Kilimanjaro to pull me out of the four walls I became trapped in. Even now accepting things is difficult but I put on a brave face.”

Carole Salmon, Community Fundraiser - ‎Mid Cheshire Hospitals NHS Foundation Trust, said: “Thank you to Roy and Ian for choosing to the donate the money raised to the Macmillan Unit – they are truly inspirational fundraisers. It is a pleasure to support them in the fundraising.”

Roy’s target is to raise £5,000 and his next fund-raising challenge is later this year in September when he aims to climb the Mount Kilimanjaro volcano in Tanzania, Africa. On Saturday 21st July (12pm onwards) there is a Garden Party at The Woodside on Valley Road in Wistaston to raise funds for Roy’s climb. The event will include a BBQ, bouncy castle, face painting & glitter, tombola & raffle, candy floss, popcorn, slush puppies, ice cream van, football challenge, owls and hedgehogs and a dog fancy dress competition. 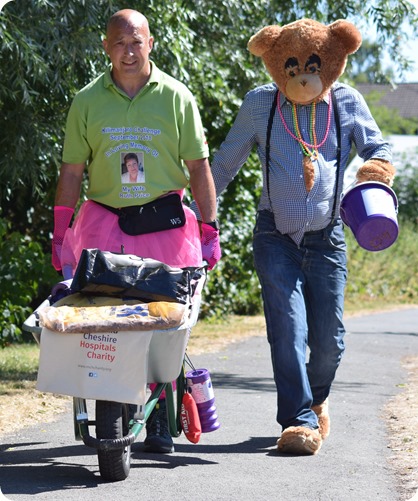