The inaugural ‘Cheshire Emergency Services Day’ in Nantwich took place at The Weaver Stadium on Sunday 8th July 2018 in aid of The Donna Louise.

The emergency services were represented including firefighters, police, ambulance and blood bikes with many of the 999 related exhibitors based in Nantwich.

Cheshire Fire & Rescue Service had several appliances on display, a Dunk the Firefighter game, and Be safe near water awareness campaign. There was also a restored City of Chester Fire Service Dennis F7 Fire Appliance from 1949.

Cheshire Constabulary displayed two police cars, a van, and two bicycles with the opportunity to sit inside the vehicles and try out a riot shield.

Shropshire, Staffordshire & Cheshire Blood Bikes had a display of their bikes that people could sit on and gave information about how they provide free urgent transportation of medical items.

There was also an artisan market, beat the goalie competition, face painting and a children’s funfair. Refreshments were available from the Dabbers Diner and other outlets.

Local radio station The Cat 107.9 FM kept visitors entertained throughout the event with a range of upbeat music and there was appearance by Twitchy the cat who was later ‘arrested’!

Proceeds from the event will go to The Donna Louise - https://www.thedonnalouise.org/ - which provides support and care for children and young adults with life-limiting conditions, and their families in Staffordshire and Cheshire. 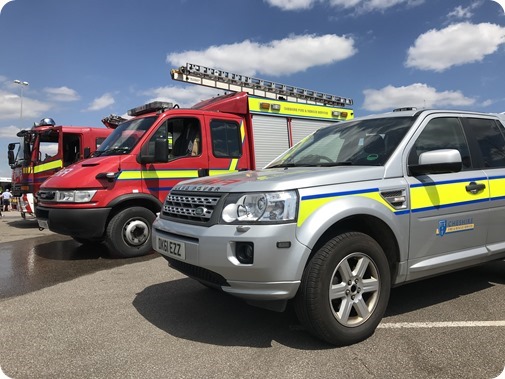