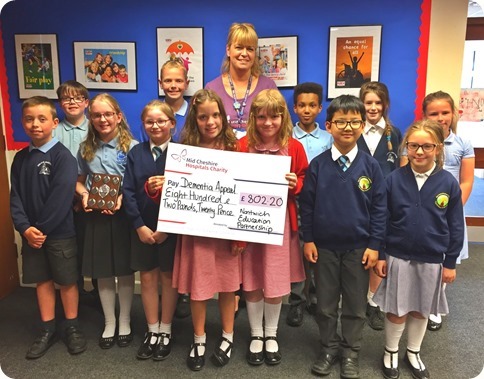 Primary schools across Nantwich have been involved in a project which raised over £800 for a hospital dementia appeal.

10 primary schools were involved in a Business Enterprise project organised by the Nantwich Education Partnership. The aims of the project were to develop an understanding of how businesses work the importance of teamwork, and through this to raise money for local charities.

Children were put into teams of five and each team was given £5 to set up a business. There is also a competitive element to the project, where local business men and women (known as the Dragons) questioned the finalists to see who will be crowned Business Enterprise Champions for the year.

The organisers of the project, Simon Dyson, Head of Highfields and Hazel Brown, Head of St Anne’s said, ‘We would like to thank everyone involved with the project for making it a huge success, particularly Peter Mascarenhas for organising all of the ‘dragons’ and Brine Leas and Malbank Schools for hosting the finals.’

Carole Salmon, Community Fundraiser for Mid Cheshire Hospitals Charity added ‘This was a brilliant way for us to engage with local school children. I sat in on the judging panels and the children’s answers showed great imagination and enthusiasm. The donated money will benefit our Dementia Appeal so massive thanks to all involved’

The six schools in the town (Highfields, Audlem, Weaver, Nantwich Primary Academy, St Anne’s and Millfields) decided to collectively donate the proceeds from the project which totalled £820.20 to the Mid Cheshire Hospitals Charity Dementia Appeal.

This year’s winners were Millfields and Weaver Primary Schools.