Talented brothers William and Andrew Emerton are officially two of the best young roofers in Great Britain after triumphing in a national skills competition.

William, 21, who studied at Leeds College of Building, won the ‘Roof: Slating and Tiling’ discipline of the SkillBuild 2016 final, a competition organised and supported by the Construction Industry Training Board (CITB). His brother Andrew, 19, took the bronze medal in the roofing category. Both William and Andrew work for their long established family business, Emerton Roofing (Western) Limited in Nantwich, Cheshire.

Emerton Roofing’s roots go back to 1925, when Ralph W. Emerton set up in business as a slater and tiler in Crewe. From here the company expanded until 1950 when his son Gerald Emerton joined the firm and took the business to the next level, including incorporating flat roofing and roof restoration on historical buildings. In 1962 Gerald formed Emerton Roofing (Western) Limited, as a limited company. Gerald was later joined in the steadily growing company by his son, current Managing Director, Simon in 1980. In the following years, Emerton Roofing have continued to offer an award winning service across the UK, specialising in traditional slating, clay and concrete tiling, roof leadwork and a variety of flat roofing methods.

In 2013 William and Andrew, who studied at Malbank High School, joined the family business as young apprentices, quickly gaining Level 2 status in Slating and Tiling at Bolton Construction College. They then went onto Leeds College of Building where they have completed their Level 3 Slating and Tiling qualification. Their good work on the course prompted tutor, Chris Messenger, to enter the brothers into one of the regional heats of the ‘SkillBuild’ competition. SkillBuild has been running for over 45 years and sees the very best in construction talent compete against each other to be crowned the SkillBuild winner in their chosen trade. The competitions assess an individual’s knowledge, practical skills and employability attributes against a set of strict criteria. The competition is run by CITB, covering ten craft occupations; including Bricklaying, Carpentry, Stonemasonry and Roofing. The roofing section is organised by the National Federation of Roofing Contractors.

In regional heat held at Leeds, the brothers managed to qualify for the national final, held last weekend (17-19 November) as part of ‘The Skills Show’ at Birmingham’s NEC. The 8 finalists were then set a 19 hour task across 2 and a half days in which they had to combine their slating and tiling skills against a strict 300 point specification. William and Andrew excelled and were very proud to be presented with the gold and bronze medal respectively.

William now has a chance to compete in 2018 representing the UK at the WorldSkills final in Latvia. 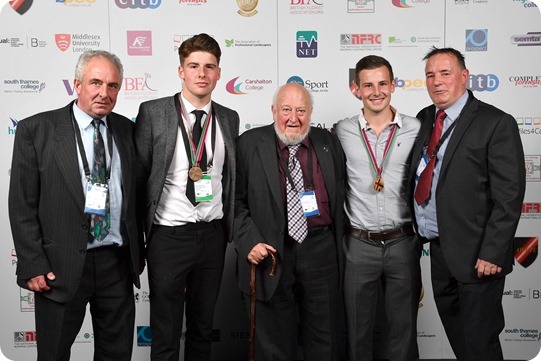