Call for Labour Candidate to apologise after obscene gesture.

The Labour Candidate for the Crewe West by-election,Tasha Maroni, tweeted a photo of herself giving the middle finger in front of the street name of where her UKIP opponent,Cllr Brian Silvester, lives.(See attached photo)

Cllr Silvester said," It is totally inappropriate for a Candidate to be making vile,obscene gestures like this.What on earth was she thinking of?

It was a very childish and immature thing to do.She is not not fit to represent her constituents.They deserve better,no matter what party they are.

She should apologise to me,all the residents of Rimsdale Close and the electors of Crewe West.

Also the Labour Party should take disciplinary action against her." 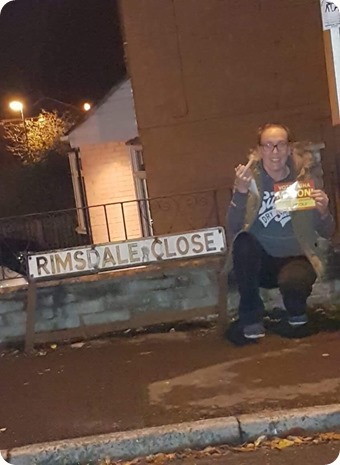 Most people will be shocked to learn that, five months after the EU referendum,the Conservative Government is still refusing to guarantee that EU citizens,legally residing in towns like Crewe,will be allowed to remain after we leave the EU.Have the Tories now moved to the far right? Have they left leave of their senses? Is there any local Conservative willing to support this despicable approach? What does Edward Timpson MP think of this extreme right wing policy?
UKIP, like all other parties,but not the Conservatives,agree that EU citizens, who are legally living in UK,should be allowed to remain in the UK after Brexit. That is the correct and the moral thing to do.I am sure that the many decent members of the Conservatives locally will agree with that and they should speak out before more damage is done to their party.

We all want to protect the interest of Brits living in the EU after Brexit but it is entirely wrong to use EU citizens legally settled here as a bargaining chip. They need an assurance that their remaining in the UK after Brexit is not in question.