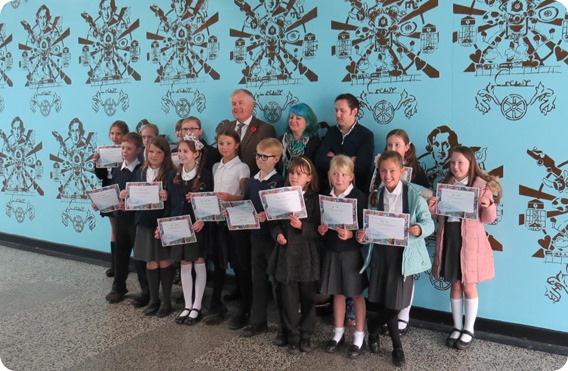 A vandalised walkway has been strikingly transformed – thanks to a Council-backed initiative to put public art back into Crewe town centre.

The walls had been regularly defaced by graffiti and it was a ‘grot spot’ that blighted the town’s image.

Now the walkway has undergone a striking major makeover – which was officially unveiled yesterday (Monday).

The bright mural was designed by pupils from Edleston Primary and Wistaston Church Lane Academy and it aims to restore civic pride in the town and promote a good first impression of the town to visitors.

The repeat design was created after youngsters were asked to shape an artwork inspired by what Crewe means to them. The project, completed by a professional artist, also aimed to portray the history and culture of the town.

Councillor Don Stockton, Cheshire East Council Cabinet member in charge of regeneration and assets, said of the revamped walkway: “This is an excellent scheme and one that this Council has been delighted to encourage and support.

“This authority is committed to improving the living environment, leisure offer and public amenities in Crewe and is investing heavily to deliver a town centre local residents can be really proud of.

“Our commitment to Crewe and its people has already seen us secure millions of pounds of investment for the town centre through the new Lifestyle Centre and the University Technical College, which will both open in 2016.

“There is also the prospect of significant investment and growth should Crewe be selected for a new HS2 North West gateway rail hub – as well as several major road projects to improve connectivity for businesses, residents and visitors alike.

“We are passionate in our belief that we can forge a role for Crewe that is based on it being a vibrant and attractive destination for people to spend quality leisure time together.”

The new mural is part of improvements to the wider Royal Arcade side, which Cheshire East Council acquired in May this year. The Council has already taken major steps towards realising a bold new scheme to transform Crewe town centre.

The authority has announced it will start the process to appoint a developer to work with it to create a mixed-use town centre development on part or all of the Royal Arcade site.

The condition of the town centre walkway was initially highlighted by local resident Sean Moulton to the site’s previous owners, Redefine International, and also by residents in the ‘Your Town Your Choice’ public consultation managed by Cheshire East Council. This survey highlighted the area as one that required immediate improvement and which has suffered from vandalism in the past.

Councillor Kevin Hickson, chair of the economic development committee at Crewe Town Council, said: “Crewe Town Council is very pleased to have supported this project to improve a well-known grot spot in the town centre.

“Although the area is earmarked for future development, it would have been wrong to have left the arcade in the condition it was in.

“We note the role of the civic activism of local people in initiating this work and encourage everyone in Crewe to get involved in improving both the town centre and their local area.  Let us all take pride in our town rather than talking it down.”