A stencilled mural has been painted in a repeated pattern onto the face of the main walkway of the Royal Arcade in Crewe town centre. The walkway connects Queensway to the Bus Station and had been vandalised with graffiti. Local teenager Sean Moulton brought its plight to the attention of property developers Redefine International.

The mural contains drawings by pupils from Edleston Primary School and Wistaston Church Lane Academy and includes the Bentley Motors logo, Joey the Swan, Queens Park, a train, a football and Joseph Locke who was the civil engineer responsible for laying out the original town.

This regeneration project is supported by Crewe Town Council and Cheshire East and the artwork was adapted by One Red Shoe.

It will be officially unveiled to the public on Monday 19th October 2015. 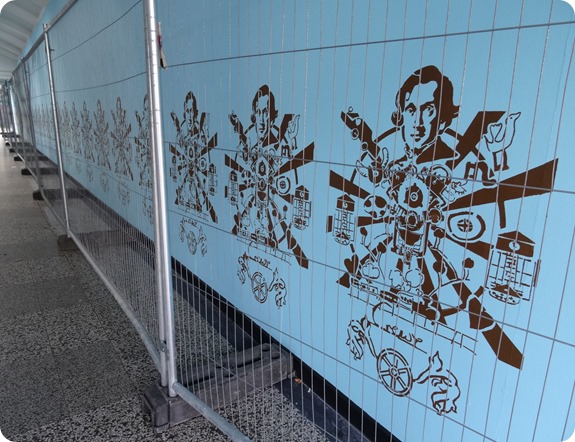