Gladman have appealed against Cheshire East's decision to refuse planning permission for their application to build up to 300 dwellings on 'Witter's Field' in Wistaston, so the case will now go before the planning inspector for a decision: http://www.pcs.planningportal.gov.uk/pcsportal/ViewCase.asp?caseid=2213505&coid=82560 .

I’ve also attached a scan of the associated letter I received this week from Cheshire East Council.

Objections to the proposal included the increase in traffic to the Middlewich Road and Church Lane areas along with the remainder of Wistaston, the reduction in open space and recreation areas for exercise and social gathering, the impact on places in existing local primary schools such as Wistaston Church Lane Primary School, the lack of a secondary school on the plans with local secondary schools already at capacity, the impact on existing local health facilities and the general blight of an urban expanse in a currently rural setting. 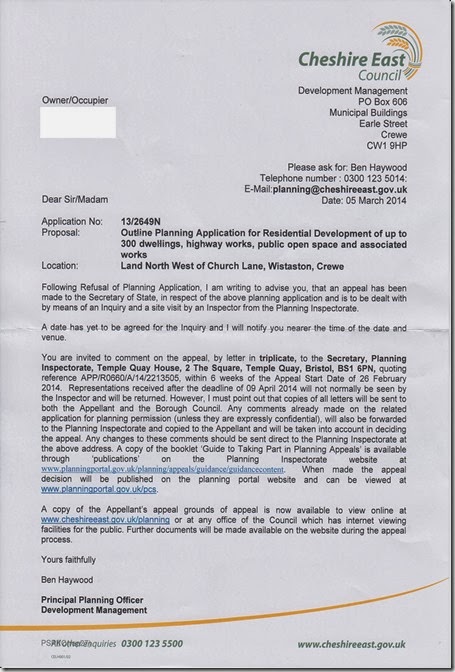