Welcome to this, my 148th news bulletin.

As a Member of Parliament you receive a lot of correspondence, with people’s views on all sorts of policy areas. It is a political truth that more people write to raise concerns than to congratulate, so it is always good to receive positive feedback on a policy.

One such policy has been welfare reform. I think this is for the simple reason that most people in Crewe and Nantwich realise that work pays, and those who do work do not believe that they should be paying for those who can, but choose not to.  In line with that view the Government has had a number of important wins. We have been:

The results are there for all to see. The most recent employment figures show that:

In Crewe and Nantwich unemployment is down by 21.7% on the last year, and youth unemployment by almost a quarter.
Welfare reform is a fair way of achieving these employment goals. We are:

This is ambitious. It is difficult to achieve. And it is common sense. The Labour Party like to criticise welfare reform, but they have a selective memory.

Labour punished work, and hardworking people lost over £9 of every extra £10 they earned. The benefit system was so complicated that for some people, there was no point in working more because they would lose more in benefits than they would earn in work.

Labour also watched while the number of people on social housing waiting lists nearly doubled. The number rose to 4.5 million people, many of whom had no realistic chance of being allocated a home. They let the housing benefit bill spiral out of control, and they still have no answer to how they would pay for the reversal of our policy of making spare rooms available to other social housing tenants who actually need them to live in.

Even after the reform we pay over 80% of most claimants’ housing benefit, but the taxpayer can no longer afford to pay for people to live in properties larger than they need. It is right that people contribute to these costs, just as private renters do. This is about ensuring fairness to those in overcrowded accommodation, those on the waiting list, those in the private sector, and importantly, the taxpayer.

Cheshire East Council have been allocated over £450,000 to help people affected by changes to housing benefit in 2013/14 and have already made 335 payments. You can read more online about these payments at the Cheshire East website.

The bottom line is this. There’s absolutely nothing wrong with claiming benefits, if you need them. I frequently help constituents in claiming benefits they are properly entitled to through my regular advice surgeries.

But I want all of my constituents to work if they can. This makes for a successful and thriving local economy that companies want to invest in. I don’t want those who do work to be subsidising those who can, but can’t be bothered.

I also want good quality social housing to be available for those who need it. Not blocked up with those taking up unnecessary space at the taxpayer’s expense, unless they are going to contribute to the cost of building more through increased rent.

That’s fairness. That’s what I stand for. And I’m glad so many of my constituents are with me on this. 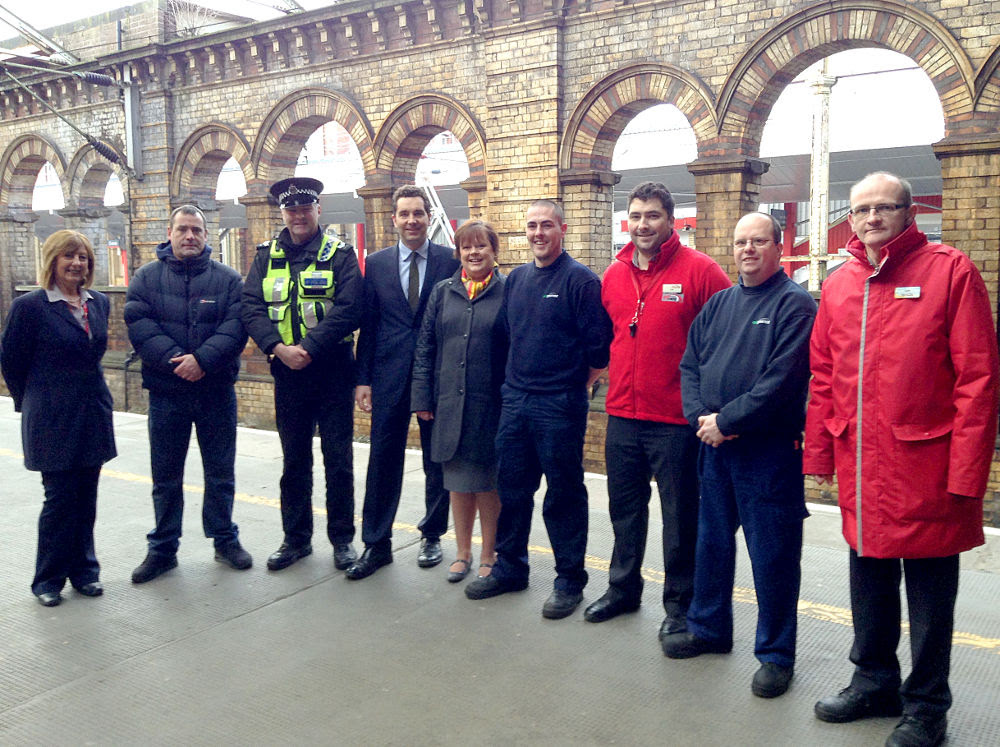 I met with station managers and staff at Crewe Station after last month's storms to extend thanks on behalf of the whole community to the team who did so much to get the trains running after the station was damaged in the bad weather.

You can view all of my latest photos on my website.

Nantwich News: Big-hearted volunteers and fundraisers celebrated after being named winners in the Crewe and Nantwich Community Awards 2014.

The awards, organised by Nantwich-based The Cat Community Radio Station, were held at Richmond Village.

They are designed to give recognition to local people who dedicate their time helping others.

Winners of the awards include Elizabeth Chesters, for Long Service to the Community; Ray of Hope UK for Local Volunteer of the Year; Crewe Alexandra goalkeeper Steve Phillips for Local Fundraiser of the Year; Bethany Daley for Young Person of the Year; and Sean Savage for Achievement of the Year.

More than 60 people attended the black tie event which included a three-course meal and entertainment from local duo Baxter.

Nominations were made by local people, and winners decided by a panel consisting of MP Edward Timpson, Debbie Owens of Crewe Lions, John Weir from Nantwich LAP and Alison Harding from Richmond Village.

Organiser of the event Claire Faulkner said: “I am so proud of everybody who was nominated.

“The high level of entries this year goes to show that as a community, we value everybody who tries to make a difference or volunteers their time to help others.

“The evening is about celebrating the achievements of everybody in our community and thanking them for all that they do.”

Crewe Chronicle: TRANSPORT Minister Baroness  Kramer paid a visit to Crewe Railway Station and the proposed site for the HS2 superhub at Crewe. The visit comes ahead of a final  decision later this year on the HS2  route and any additional new stations.

The Liberal Democrat Peer said she was “delighted to visit the site” and praised the “passion” of Cheshire East  Council leader Michael Jones and avid HS2 supporter, Pete Waterman, who is a board member of the Warrington and Cheshire Local Enterprise Partnership.

Together with Crewe and Nantwich MP Edward Timpson, they are spearheading the Crewe superhub bid.

Baroness Kramer told the Chronicle the purpose of her visit had been to see Crewe and the proposed station site for herself. She was also adamant no decision had been made about the Crewe bid - or any other bid - and there would be no announcement until the end of the year.

“When people respond to a consultation you get a real understanding of the community and the potential,” said the Transport Minister, speaking at Crewe Station.  “The Secretary of State will make an announcement towards the end of the year but  I find it very helpful to come out and see the  situation on the ground. It helps to clarify the  issue.”

Cheshire East Council, together with MP Edward Timpson and Pete Waterman, have been campaigning for a superhub station at  Crewe since details of the Government’s preferred HS2 route was first announced.

Baroness Kramer said there had been various interesting bids for new stations and ‘not  everyone will end up happy’.

She said it’s important to use HS2 not just as a means of getting from A to B but to use it to underpin economic growth.

When pressed about the strength of the Crewe bid, the Baroness said: “It’s important  that we look at the consultation without closed minds and don’t make snap judgments.”

Crewe and Nantwich MP Edward Timpson, who also held talks with Baroness Kramer during her visit on Thursday, said: “It’s  fantastic to have Baroness Kramer here to see for herself both the station and the  proposed site.”

Mr Timpson, who has been working behind the scenes, said the bid put forward by Cheshire East and himself for an HS2 station  for Crewe ‘is a no-brainer’ not just because of the excellent connectivity but also because of the town’s ability to provide workers with the expertise, not just for construction but for  ongoing maintenance.

“It would be good for Crewe and the surrounding area,” said the Conservative MP.

You can read the full story at the Crewe Chronicle website.

Crewe Chronicle: CREWE and Nantwich MP Edward Timpson has praised rail services and emergency services for their swift response in getting to passengers to safety after part of  the station roof blew off in severe gale force winds.

Crewe and Nantwich MP Edward Timpson said: "My office has spoken both to the station manager and the regional manager for Virgin Trains, who are to be congratulated, along with their staff, for getting the situation under control so smoothly.

"I am also grateful to the Crewe Arms Hotel for taking in evacuated passengers. This shows our rail community pulling together in time of need.

"I have promised Virgin every assistance in getting the building repaired swiftly, should my help be required."

Crewe Chronicle: Edward Timpson MP has welcomed statistics that show the Government's economic plan has helped get 7,500 young people off benefits in the North West over the past year.

Crewe and Nantwich itself has seen a 24.1% fall in youth unemployment in the last year.  Edward Timpson said: "Here in Crewe and Nantwich we have seen a fall in youth unemployment of almost a quarter in the same period. That means 7,500 more people receiving a regular pay packet, learning a profession or getting the training they need to give themselves a more secure future.

"Of course there is still more to do, but these figures show that the long-term plan to fix the economy is working, getting people off benefits and into work - delivering a more secure future for young people in Crewe and Nantwich who want to work hard and get on in life."

And the business capital of the UK is...

Crewe has been named one of the top twenty places in the UK to start and run a business, by Experian research, published this week.  Crewe is the only town in the North West to make the list.

The Daily Telegraph: "The information services company rated the towns and cities across the UK on four criteria: the number of start-ups; rate of insolvencies; the level of financial health; and turnover growth compared with 2012. Northampton had the highest overall score, closely followed by Southall in south east London, Aberdeen and Bristol.

"Towns in the South of England accounted for 65pc of the top 20, with only Crewe and York representing the North, while from Scotland, only Aberdeen made the top ranking. There were no top 20 entries from Wales or Northern Ireland."

You can read the full article on the Telegraph website.