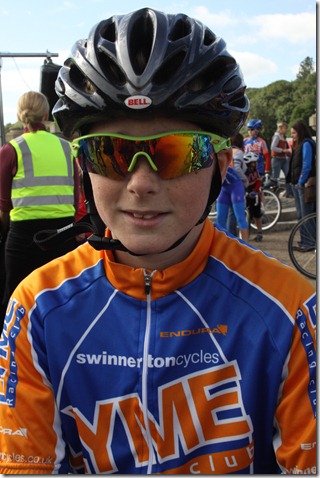 James Duncalf, aged 12, from Haslington has been involved in a major cycling event. James, who is a member of Lyme Racing Club - http://www.lymeracingclub.com - was one of a selection of his Club’s youth section who led the professional riders over the start line of The Tour of Britain - http://www.tourofbritain.com . He led out the cyclists during Stage 5, which took place from Trentham Gardens on 13th September. James has been involved in cycle racing since the age of 8 and competes every week at the National Cycling Centre indoor velodrome in Manchester. James said, “It was an honour to be asked by my Club to lead out the riders. It was fantastic to line up with my cycling heroes which included Bradley Wiggins and Mark Cavendish.”