Fundraiser prepares to run 226 miles in a week 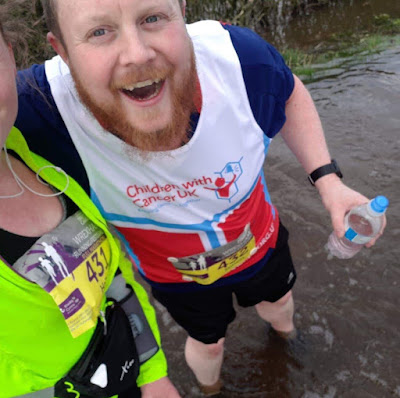 Simon Benbow, age 36 from Shavington, is training hard in readiness to run to London and then run in the London Marathon to raise money for charity ‘Children with Cancer UK’.

In preparation Simon completed the Wrexham Marathon (despite flood water on the course) in March and is running the Greater Manchester Marathon in early April.

On Sunday 28th April he will join 42,000 other runners to undertake the 26 miles 385 yards of the legendary London Marathon, https://www.virginmoneylondonmarathon.com/en-gb/

Simon aims to raise £3,000 for Children with Cancer UK and is close to achieving his target.

Children with Cancer UK actively raise and invest money for vital specialist research to save the lives of every child with cancer and keep their family together, https://www.childrenwithcancer.org.uk/

Simon Benbow said, “After being diagnosed with cancer and then losing my mother to cancer a year later I suffered with depression pretty badly. The doctor told me that taking up a hobby or setting myself a goal would help me. I started thinking of ways I could raise some money for a cancer charity and get fit along the way. My wife suggested I run the London marathon again, as I’d ran it in 2015 and 2016. Then I had a daft spur of the moment decision to run to London as a way of raising some more money and the idea just took off! Training for the challenge has probably been the hardest thing I’ve ever done but it really has helped me out. I set myself an ambitious target of £3,000 and I’ve been overwhelmed how supportive people have been. I’ve even had donations from complete strangers that have heard about what I’m doing and while most people think what I’m doing is slightly mad, they’ve been very supportive about the whole thing.”

To sponsor Simon please go to: https://uk.virginmoneygiving.com/simonbenbow
Posted by Jan Wright at 00:07