'Chalk It Up’, an international pavement art festival, was officially launched at Crewe Railway Station on Thursday 27th July 2017.

The festival will take place on Saturday 26th and Sunday 27th August 2017 in Market Square, Crewe.

Around 30 artists, many of them multi-award winners, will be arriving from across the globe, including from the United States, Mexico, the Netherlands, Italy, France and the UK to take part in the festival. They will use chalk pastels to create impressive 12ft x 16ft pieces of artwork and will be competing for a series of cash prizes. During the weekend, visitors will also be able to give pavement art a go themselves and there will be a children’s competition.

At the launch event, Crewe-based artist Christine Edwards gave passers-by a taste of the type of artwork they can expect to see at the festival, by creating a piece on the overbridge at the station. 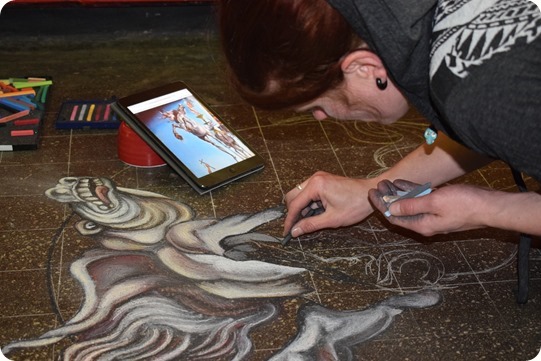