The people of Crewe honoured the life and achievements of Bradley Lowery at Memorial Square in Crewe on the evening of Friday 14th July 2017.

Bradley, from Blackhall Colliery in County Durham, passed away, aged six years old, on Friday 7th July 2017. He was a Sunderland football fan who was diagnosed with a rare type of cancer - neuroblastoma - when just 18 months old. He became Sunderland's club mascot and also "best mates" with his hero, striker Jermain Defoe. Bradley's brave fight against cancer inspired millions and has helped raise over £1 million for charity.

The event took place on the day of Bradley's funeral. There was a short speech from Shaine Tench about Bradley and what this young boy achieved and how he brought so many people together, followed by a two-minute clapping ovation. A hugging exercise then took place to symbolise Bradley bringing people together, then children at the event were invited to release ten helium-filled balloons.

A person dressed in a Mickey Mouse cartoon character costume attended the event, as Bradley was a Disney fan. It was also hoped that the Mickey Mouse brought comfort to children who didn't understand the situation in relation to Bradley.

There was also a donation bucket with all funds donated to the Bradley Lowery Foundation.

The event was organised by Shaine Tench, from Crewe, who said, "We came together as the great community of Crewe to show our support for Bradley and his family during their sad loss. Bradley was a hero to myself and many others." 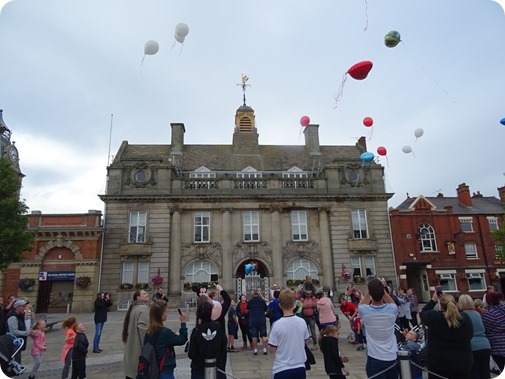