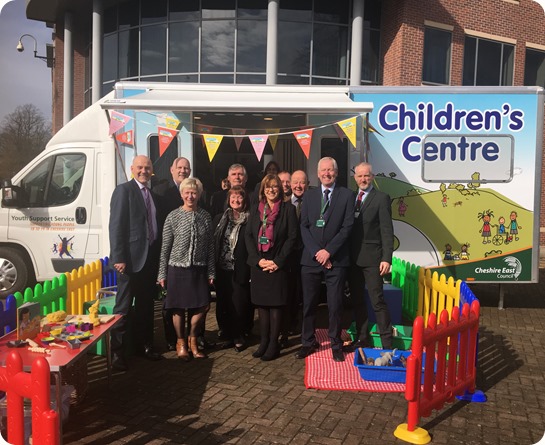 Cheshire East Council has launched its new mobile children’s centre – and they want to know your views on it.

The vehicle, part of the council’s children and families’ service, will be launched at the Council’s Sandbach HQ on March 7 and then tour the south of the borough in a series of roadshows, visiting areas around Crewe, Nantwich, Middlewich, Sandbach and Alsager.

The Council is inviting parents and families to drop in and find out more information about the service, take a look at the new vehicle and talk to the dedicated team. Children and young people are also invited to ‘road test’ its facilities.

The service places a focus on providing help and support to families earlier – evidence shows that a child’s experiences in early years (0-4) has a major impact on their health and life chances, as children and adults.

Research in early 2016 suggested that there was broad support for a mobile service, particularly among parents who had experience of accessing existing children’s centres.

“By working in partnership with health visiting, childcare providers and schools, the new vehicle will allow us to deliver effective support to those families that most need it and where they are able to access it – ensuring that more children have the best start in life and are ready for school.”

For more information about the mobile children’s centre, including the dates and locations of the roadshow, visit: www.cheshireeast.gov.uk/fis