Members of Wistaston Jubilee Tennis Club have completed a fund-raising walk along the entire 34 mile length of the Sandstone Trail.

George Raiswell, Tony Mason and Ryan Harper-Griffiths walked a twenty mile section between Whitchurch and Tarporley on 27th August 2016 in eleven hours. George, Tony and Ryan then walked the remaining fourteen mile section between Tarporley and Frodsham, with Ben Reinhardt, Eric James and other club members, on the 15th October 2016 in seven and a half hours, despite getting lost!

During the walks they had elevated views at Frodsham, Raw Head and Bickerton Hill and took in some beautiful scenery and saw a wide range of flora and fauna.

Each member paid to participate in the walks and all funds raised will go to Sport Relief http://www.sportrelief.com/

A representative said, “It was a difficult but memorable walk with fantastic views. We have all improved our fitness levels and have the blisters to prove it! It was all for a good cause and we are so pleased to support Sport Relief in their fund-raising efforts.”

Their next challenge is to take on the 35 mile Gritstone Trail from Disley in Cheshire to Kidsgrove in Staffordshire, taking in Lyme Park, Sponds Hill, Tegg’s Nose, Croker Hill and Mow Cop. They plan to tackle the trail in three separate sections. 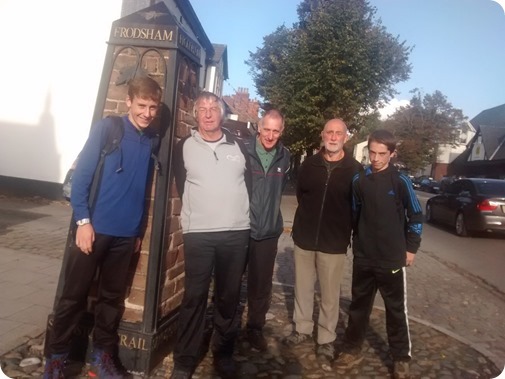